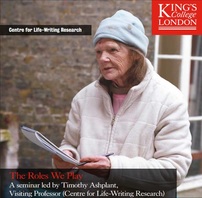 ATD Fourth World UK project The Roles We Play was invited to be a collaborative partner in a seminar from a much bigger project called “Life Writing from Below Europe” which aims to bring together a network of researchers and archivists around Europe to assist intellectual exchange and practical co-operation. Speakers included some of our valued members (Georgina, Amanda and Moreane), Timothy Ashplant, Visiting Professor at the Centre for Life-Writing Research at King’s College London, Eva Sajovic, photographer of The Roles We Play Project and Dr Tom Woodin, Reader in the Social History of Education, UCL Institute of Education.

Our members had the chance to speak in front of a mixed audience at King’s College London about the project itself, the process of creating it and their experiences of the reception it has received. Timothy led the seminar and started by raising the difficulty of getting people in poverty heard since Victorian times – whose voice is actually heard? He brought the example of Henry Mayhew, an English social researcher, journalist, playwright and advocate of reform, famous for his book London Labour and the London Poor published 1851, who wrote as follows: “it surely may be considered curious as being the first attempt to publish the history of the people from the lips of the people themselves, giving a literal description of their labour, their earnings, their trials and their sufferings in their own unvarnished language”.  Although this seems to be a wonderful goal to aim at, the Visiting Professor went on further to explain that it’s actually a very difficult goal to achieve, as also pointed out by one of Mayhew’s work analysts, John Seed: “the result of Mayhew’s endeavours was more complex. The process of transcribing from shorthand and from notes taken on the spot was also a process of translation and interpretation as Mayhew transformed his raw materials into coherent prose, smoothing out repetitions and hesitations and non-sequiturs. People do not usually speak in coherent prose. Mayhew’s questions were generally removed so that witness testimony could read like a monologue. There was also some discreet censoring”.  Timothy raised the question of how to balance out what people in poverty actually want to say, interpreted and filtered by people who have never experienced it themselves. He recognised that that our project is helping to tackle this problem and get the real word of poverty across different levels in society.

Moreane, one of our Anti-Poverty Campaigners, said during the seminar that “without writing, the history of people in poverty is lost. People in poverty often don’t write things down. (…) I want to explain why it’s such an effort for people in poverty to write. Often it starts with poor education, bad spelling, being conscious of their handwriting and the vocabulary, not sounding professional and being made to feel ashamed. (…) Often we suffer from generations of low self-esteem and think that no one will want to read what we write or care about it. The conditions that enable us to write mean that we have the facilitation of time and space to think and to have others to bounce ideas off, for there to be people that are willing to listen because approval gives you confidence, to have regular meetings, recordings, spoken words to help collate and place things in time. The other thing that’s important about writing is that it gives you ownership of your own thoughts, ‘I live in poverty but I still manage to contribute’.

It was quite powerful at the end, before things went to print to be able to re-read what we’d written over time, to be able to think is that the final thing that I want to say, to think is that what I want to leave in this book forever and once we’d done that and it was chosen and it went into print, that is an amazing sensation, having your words, next to your image, it validates you. No one can say you never existed or you never did these things or you were never truly alive or contributed to society because it’s there, it’s in the book and it makes us real.”

Eva Sajovic said how inspirational and special it feels to be part of a project which is “collaborative in the proper sense of the word, co-produced with the people who are in the book from the start.” She also mentioned how the time devoted to build relationships with the community was crucial. This allowed ultimately people in the book to take ownership of it, instead of being driven by obligations and commitments to the funders, like in so many other projects. For her, it was very important to end up with pictures which represent people the right way, the way they want to be represented.

Amanda and Moreane both spoke about how empowering having control over their images was. You can read Amanda’s post on image ownership by clicking here.

Georgina gave her contribution to the evening with one of her poems:

‘The City Beyond The Water Pattern’
I have written so many poems for people,
But never had the honour to write something for someone higher than me.
That is because I am not a high class writer.
I have not reached the top of the hill yet.
But when I do my writing the words will take shape.
Then I can do what I have always wanted to do, to write something about what happens beyond the city and over the water pattern.
Someone asked me; ‘what is the water pattern? Is it the sea?’
I said, ‘Yes’.
When the light wind is blowing in the right direction over the sea the water changes colour.
Just like poverty has three meanings: hope, peace and victory.

The evening drew to an end with Tom who gave examples of other similar works and he believes “it’s a continuing area of activity that continually struggles against this sense of isolation, that’s perhaps central for many in the experience of poverty. (…) We’re living through continuing forms of crisis in which the ideas of ordinary people are essential to rethinking to how we might live.”