Skip to content
Home > Blog > “I No Longer Feel Ashamed”

“I No Longer Feel Ashamed” 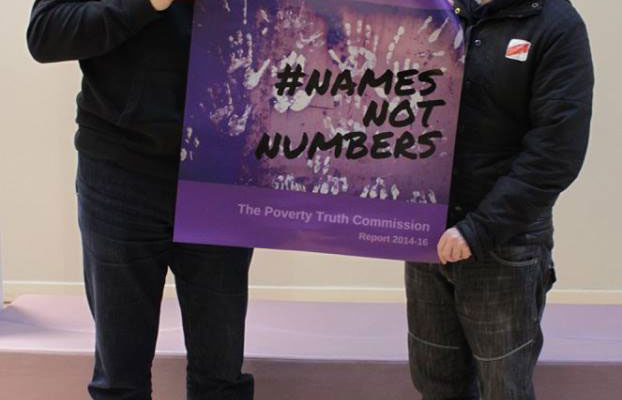 Poverty Truth Commissioners at the launch of the “ Names Not Numbers” report.

The Poverty Truth Commission in Scotland brings together people living in poverty alongside key decision makers. This has included members of parliament, the head of education, the head of health and even celebrities. Everybody tells their own story and shares it with others. What is relevant to people in the room is what will be discussed and worked on. I was part of the 3rd round of commissioners. Each commission runs for eighteen months. In this commission, the themes that came out of the discussions were: “food poverty”, “dignity and the power of stories”, and “the cost of school”. A report, Names Not Numbers, was published with recommendations at the end of the commission. The 4th commission will start in January 2017.

I became involved with the Poverty Truth Commission in Glasgow two years ago. My friend was already a commissioner and thought it would be something I would enjoy doing. Previous to the commission, I had been suffering panic attacks and agoraphobia. I was isolated and lost about how to communicate and interact socially.

When I first started going to full commission meetings I wouldn’t talk. I would be the one in the room listening to everybody; no one heard me. It took me five months to feel comfortable enough to talk in the room. I liked that it was informal and everyone was on first names. There were no titles and everyone was genuinely interested in what people were saying about their lives living in poverty. Poverty Truth gave me time without bringing attention to me and allowed me to speak in my own time with no pressure. I think otherwise I would not have gone back! As time went on and I regained confidence, I was starting to feel like me again.

I got to know the other commissioners through the different groups. In one of the small groups with Poverty Truth we spoke about the stigma of being in poverty. Even now I still get angry when I watch programmes on TV about how people on benefits are portrayed. It’s undermining people on benefits.

Allan, a previous worker with Poverty Truth, asked me to do a talk in Edinburgh with him. So I went from not speaking at all to standing in a room of around 100 people to speak about the new Scottish welfare system coming into effect in 2017. I was never under pressure to do this and Allan phoned regularly to make sure I was ok. I was speaking about my life on benefits as a lone parent with 2 teenage children. I said how I have not wanted them to be stigmatised by the label of growing up in poverty and I talked about the need for decision makers to be respectful and treat people with dignity. I had always hidden and felt ashamed even to say I was living in poverty and I had hidden that from my sons. I do not buy myself clothes or have nights out. With what money I have, I make sure they are never deprived or are any different from their friends, except with holidays. It still hurts me even now that I cannot afford to go away anywhere with the boys. I no longer feel ashamed since talking to people in the same situation. They totally get it and understand it and that has made a big difference to me personally.

I have always felt supported and included at the Poverty Truth. I am part of a working group in the Poverty Truth Commission focusing on the school clothing grant. Parents that are on benefits and low income get a grant to help buy a school uniform. After I researched the amounts for grants in different local authorities in Scotland it became apparent that not only were the amounts varied but they mostly never covered the real cost of a full school uniform. We are planning to meet with Deputy First Minister and Cabinet Secretary of Education John Swinney to discuss a minimum amount for clothing grants that is fair to everybody who qualifies for one in Scotland. I am really looking forward to seeing the conclusion of the past year’s work on this. I am also in a working group on the new social security powers coming to Scotland.

The Poverty Truth gives people like myself an opportunity to discuss through group work everyday matters that affect them. It also offers the chance to let others see we are not alone with our struggles and can overcome illness and setbacks. I am very aware it’s not always easy and some people will keep struggling with their own situation. I do believe in hope and happiness. I like justice and I hate injustice for people who may not be in a position to speak out for themselves. I feel strongly about representing them. This will also make the future better for myself and my boys. Hopefully it will be a more fair society.