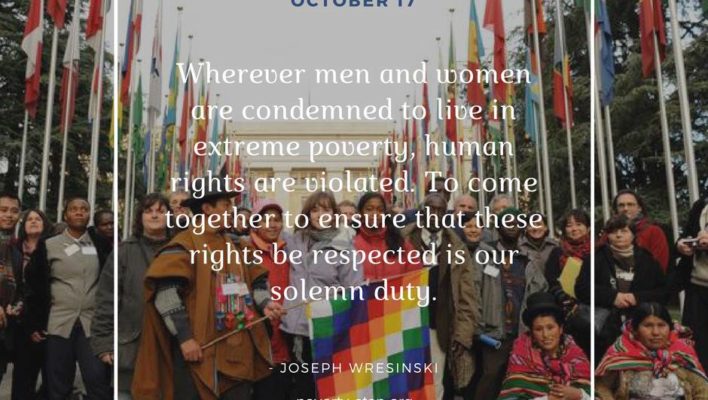 In Scarborough, Britain and the world, October 17 is known as the ‘World day to overcome extreme poverty’.  The United Nations recognised the date in 1987 when a commemorative stone was unveiled by the Eiffel Tower in Paris.  100,000 people were present that day and since that time it has grown into a global phenomenon.  The founder of the organisation, Joseph Wresinski, was a man who grew up in poverty in post world war one Paris. He was born in 1917 so 2017 not only marks the 30th anniversary of the commemorative day but also 100 years since the founder’s birth.

What makes October 17 special is that its theme is listening to the poor.  Wresinski saw that most governments and agencies think they know what is best for poor people but in reality it is often the poor themselves who understand the barriers to escaping poverty.  It is not only lack of work, but also secure housing, education, health and confidence that is needed. Deep poverty often afflicts many generations of the same family.  In 1957, Wresinski founded, with families suffering extreme poverty, the organisation ATD Fourth World. They all knew that what humans need most is dignity and a sense of worth. Wresinski said that nobody should die without having given the best of themselves in life.  This means having opportunities and support.

Volunteers now work for ATD Fourth World in 32 countries, including some of the richest, the UK, USA, France and Germany.  In Britain, the team work with families where poverty often results in having their children removed by social services. The teams use culture, education and art, to build relationships with the families and support them in their fight for recognition and dignity. The team also work with the government and social services to influence policy and they publish books and reports about their work and findings.

I visited our local soup kitchen and poverty support centre but nobody wanted to comment about O17 so I went down to the seafront and talked with a homeless guy there.  This is what he had to say about poverty:

I feel I have been groomed into poverty from childhood. Everyone is involved but it comes down to individual’s strengths and weaknesses. I have been homeless for seven years with drugs and alcohol and crime. I came from a large family with restricted finances ending up in borstal and in and out of institutions. As a teenager I was frustrated and vulnerable. I had a lot of resentment and became dishonest and got bad advice from others. My health and wellbeing was bad. Hostels are dangerous places but even on the street I have been attacked next to a cctv camera and the Police did not come. Nobody has the right to stop people prospering. I have no friends or family now and I would like to do something interesting with my time. Being on the street it is hard to keep clean and it takes ages to warm up in the mornings. It feels like modern day slavery, I am controlled by other people.