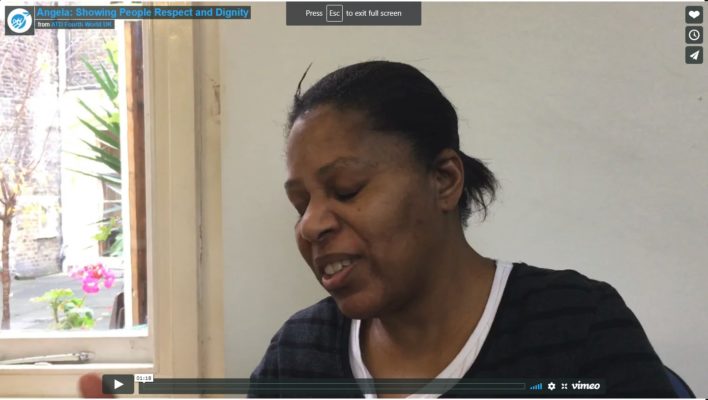 Me and my daughter were speaking about homelessness after seeing a documentary on TV. There were two homeless men behind a shop looking for food in the skip. So much food is wasted and it is not right. People need food.
My daughter also saw something on facebook about how a homeless man stood up for another homeless man who was getting beaten by a gang of lads. He was brave to stand up and this made us want to do something positive. We just wanted to do something, even a small thing.
I’ve been homeless and I know how hard it is to be on the streets in London. It’s scary. I was on the streets at a young age for a while and I will never forget it. As a family, we have also been threatened by eviction and we were very worried about it. ATD Fourth World supported us to get through it, but it was touch-and-go for a while.

The government need to do more, all the empty buildings could be used to accommodate people, free hostels could be offered…it is 2017
People who are living on the streets often get ignored. Not many people speak to them. A smile and a friendly face are important. People end up on the streets for all sorts of reasons. We should not judge them. We are all human and we all have our own stories.
My family is struggling ourselves and at times we don’t have enough money to see us through the week. But we decided to save up £20. Then we went to the supermarket and bought some basic bread, cheese, salad, and ham to make sandwiches. We got home and made about thirty sandwiches. We wanted to make something warm but we weren’t sure how to keep it warm. We put all the sandwiches in a shopping trolley and set off into central London. We wanted to go and speak to the homeless people and offer them a sandwich and a chat.
We were both very nervous at first and did not know what to expect, but we pushed ourselves and did it. We went out and just started talking to people, we didn’t want to disturb them, but the reactions were good. People smiled at us and talked to us. Most people were very grateful. We met people of all ages–young, old, men and women.
One elderly man really made an impression on me. He was very kind and smiled at us. Yet we didn’t really know what he was thinking and we didn’t speak a lot. It was nice just to be able to sit with people and take time with them. It is not a lot, I know, but we just wanted to do something for people less fortunate than us. Showing people respect and dignity is important and we can all do it.
We can all fall into poverty you know.
Me and my daughter hope to go do it again next week.

By Angela: ATD Fourth World UK
Angela speaks about food poverty in The Roles We Play: Recognising the Contributions of People in Poverty
www.therolesweplay.co.uk