“Trapped in a Parallel Universe” 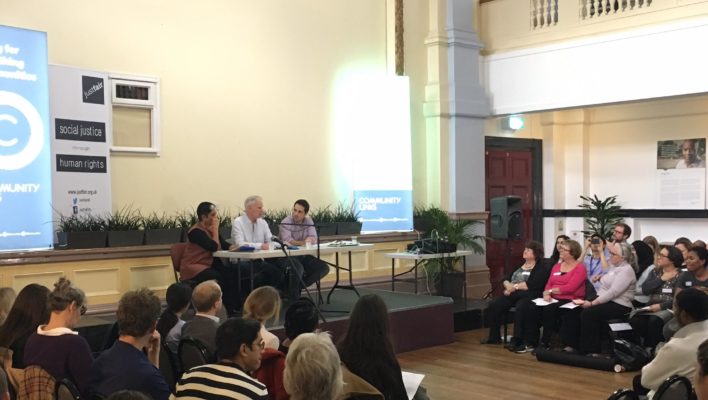 On 12 November, two members of ATD Fourth World were invited to speak at a Town Hall Meeting in Newham, London. They were addressing Philip Alston, the United Nations Special Rapporteur on Extreme Poverty and Human Rights. This is the statement made by Cathy.

During the time of this government, I don’t recognise England. Would Beveridge?

I have never known such fear, uncertainty, trauma, panic, numbness and surrealism. I feel trapped in a parallel universe. Did the marginalised in 1930’s Europe feel like this??

Every word out of our mouths is ignored or twisted and misconstrued. Lies and excuses abound. At each turn is callous nastiness, underhand tactics.

People are judged and criticised

against their own surmised

only gets snide comments with laughs,

saying they are then to be punished for trying.

The unacceptable has been changed to the acceptable.

The local authority don’t tell us anything, they just take and stop services. We have no voice or power with communities smashed to pieces. Education pared to the bone, no adult or continuing education.

Sanctions kill! Destroy and demoralise. Some schools have washing machines to help families and help provide food and clothing. Not all of them, but some have taken on that role.

The pain and anguish of relying on food banks, and other charities for basic needs are soul destroying, rent and utilities are unaffordable causing evictions and homelessness.

We are controlled, constant reassessments by non-medical people and changes in benefits and what any transitions can do is terrifying we cannot make plans to move forward but submit to existence. It makes us frightened to use our voices, because it dis-empowers us to abuse of power in retaliation. Even have our children taken.

Nobody tells us anything. Vulnerable people and carers have to battle on alone, we have to struggle to get any access to quality information and support if at all.

Another big problem we face is lack of continuity in social services. A parent can develop a good relationship with a social worker who sees how well the parent is doing who has discernment to social issues and problems and how they affect families, can develop a working relationship and rapport to support, but then there’s a staff change and the whole relationship is lost, all support gone. You can end up with a social worker who is biased and blinkered and who has a completely different perspective, and who could have their own agenda or opinions over lives; that will have terrible repercussions for the family.

All we ever hear is ‘not my problem’, ‘not my job‘, ‘not my responsibility‘, ‘I’ve got my job to do, and no one cares how they do the jobs‘ while we have no control over our lives, they belong to the state.