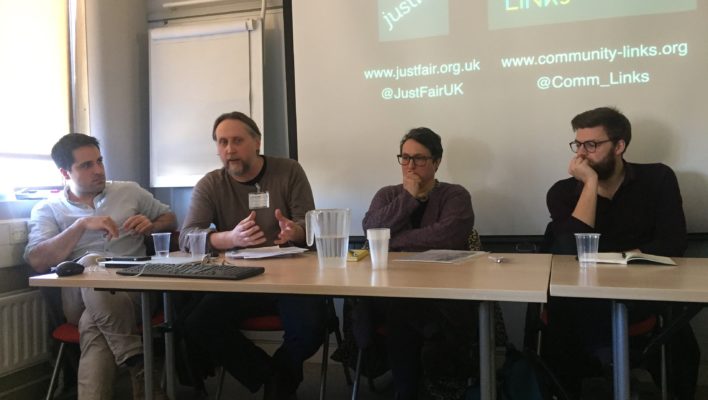 Above: Tom Croft is the second on the left. (Photo by Imogen Richmond-Bishop).

In February 2019, Just Fair convened a meeting to present to Amnesty–UK the experiences  several organisations had with the UN Special Rapporteur on Extreme Poverty and Human Rights, Philip Alston. Tom Croft, of ATD Fourth World’s National Coordination Team, was among those who made a presentation. This article gives excerpts from his remarks.

ATD Fourth World has a human rights, people-centred approach to overcoming poverty. We work with people living in poverty who directly experience what that means at a grassroots level. We deeply believe in the participation of people in poverty in all aspects of society. We want to go further than just inviting people to tell their stories. ATD Fourth World takes people in poverty seriously and engages them intellectually in thinking about a range of issues.

Most of the individuals and families that we get to know have experienced persistent poverty. For years, they’ve been struggling faced with the consequences of social exclusion, social isolation, and social discrimination. This impacts all areas of their life. It leads to severe and reinforcing disadvantages. People feel completely trapped.

Before meeting Philip Alston, we prepared with two grassroots activists, both mothers living in poverty. One, who is now a grandmother, has a great concern for all generations of her family. She really wanted to stress that austerity has created a hostile environment that is dehumanising. It’s a controlling, punitive, harsh system. Whatever your politics, the way that this is being implemented is just cruel. Her family went through a terrible ordeal of sanctions because even though her adult son turned up for an appointment, the office did not log his presence properly in their records. That led to him losing all his benefits. He had to go to a tribunal and fight for a long time. His mother said, ‘It’s like a Kafka novel. You’re not believed and everything is twisted.’ How can such a flawed process be the basis for a system that is supposed to support our most vulnerable citizens and defend their rights? It’s ludicrous as well as cruel. She really had some very strong language that she put across to Philip Alston about that. We were impressed at how his report captured the dehumanising nature of austerity without watering it down, which is a rare thing in our politics.

The other activist who spoke to Alston on behalf of ATD Fourth World wanted to put forward a different issue: the right to family life. It is a scandal in our country that there’s a straightforward correlation between families experiencing poverty and children going into care and being forcibly removed from their parents.

This issue is much more complex to get across in terms of human rights. It hasn’t been unpacked enough and it tends to get incorporated into the right to privacy. But the right to family life is a distinct issue: what is the impact on family life of poverty, social exclusion, and politically disastrous reforms? Unpacking the issue starts with that impact. Next comes the question: what are the responses of society to that impact?

We’ve long experienced a disproportionate relationship. The poorer you are in this country, the more likely you are to have your children taken into care. Just when you are at your most vulnerable, facing very complex issues, and in need of support, instead the family is split apart. As a society, we’re not talking about this properly. It gets muddled up in child protection discourses, which obfuscate the link with poverty. Poverty isn’t neglect; yet it’s being viewed as neglect. Certainly, poverty represents neglect by society; but it’s not neglect by mothers and fathers struggling to cope with harsh circumstances. And yet seeing children suffer in poverty leads society to interpret this as a result of parental failure.

We have to recognise that the problem is not only austerity. This was going on long before austerity. We have to be careful and realise that this controlling approach to social policy didn’t occur suddenly with the coalition government in 2010. The roots were already there. Unfortunately, New Labour was a bit conflicted: yes, we need to bring human rights solidly into UK law; but on the other hand they brought forward ‘anti-social behaviour orders’ and other measures to control people. Our society has long had a controlling approach to social problems. There’s a particular social policy mind-set that can see people as the problem. The impact of some of those policies can have terribly counterproductive outcomes.

The impact is also agonisingly painful. The mother speaking to Philip Alston tried to say that there is a human rights issue here. She has literally felt like screaming. But unfortunately, Alston did not engage with this issue. I wasn’t terribly surprised, because it’s a very difficult issue to get your head around and really understand. There needs to be much more research on what’s really going on here. But we were disappointed that Alston only touched on the impact of poverty on families. He didn’t get to the root of this particular human right. There’s so much work to do in the whole human rights community on this issue, particularly in countries like ours because policies here influence policies elsewhere.

How to build on Philip Alston’s visit

In ATD Fourth World, we’ve long insisted that poverty needs to be understood in human rights terms. We’ve tried our best to push this in the UK since the 1990s, but we’re a small organisation. In this country, concepts like inequality dominate the debate on poverty. Those are important concepts, but inequality is not the same as social and economic rights. It’s brilliant now to have partners who recognise poverty as a human rights issue. For Philip Alston to name and shame Britain on that level has shifted the public debate. I hope it’s a permanent shift so that from now on we all talk about human rights and poverty in the same breath. Human rights are the only way to hold our leaders to account for structural change.

It was also very positive that, during Philip Alston’s visit, he spent twelve days going around the country and listening to people in poverty. Why didn’t the government do that when it implemented Universal Credit? To understand the impact of policies, you need to talk to people. Philip Alston managed to listen to so many people in twelve days.

In ATD Fourth World, we’ve been partnering with a number of grassroots groups in the north of England, groups like the Dole Animators and Thrive Teesside. This has grown into the APLE Collective (Addressing Poverty with Lived Experience). They’re small groups, but they’re made up of people who know what this experience is on the ground, because they’re living it and facing it. They need to be able to tell their stories, but also to think and dialogue with people. These small groups need bigger organisations to amplify their voices, and also to create platforms where dialogue around poverty can happen with people in poverty who have support to prepare.

As many people are pointing out, food poverty here is worsening. This creates a difficult challenge, because it’s a humanitarian instinct to respond to that need through food banks. And the people working at food banks are lovely people. But it’s a scandal that the need is there. It’s a disgrace that anyone goes hungry in Britain today. We also have to recognise how humiliating it is for people to rely on simplistic charity. It’s soul-destroying. The fact that we’ve arrived at this point in our society is a disgrace. How do we really understand food poverty? Again, we’ve got to understand it with people who are experiencing it, people who know how it feels to go to a food bank, and who know why this is not acceptable. Yes, needs need to be met; but in this day and age can’t we find a completely different approach?

The human rights challenge that we should work on together is socio-economic duty: