Skip to content
Home > Understanding Poverty In All Its Forms > Blog: Growing in Confidence as a Co-Researcher

Blog: Growing in Confidence as a Co-Researcher 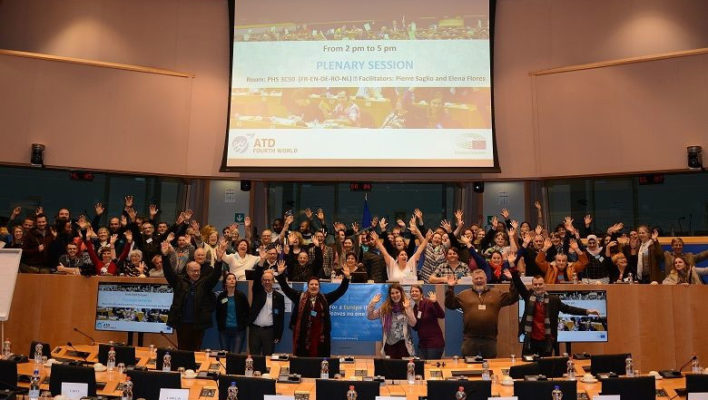 By Amanda Button in dialogue with Dann Kenningham

In February 2019, you travelled to the European Parliament in Brussels to speak as an ambassador for a UK research project. What did that mean to you?

I was asked to represent the UK and in particular to share some of the work we have done in the Understanding Poverty in All its Forms international research, which we began over two years now focusing on what poverty means and feels like.

In this research project I am what we call a ‘co-researcher’. This means that I have been involved in all aspects of the project from the very start: from the planning stage, to designing the research tools and methodology, to going out there in the field and taking part in the peer groups across the UK, and finally working on the research findings with a team of other co-researchers from all different backgrounds.

The final findings from this research will be ready to go public in October 2019.

Even though we are not yet ready to share our research findings publicly, in Brussels I had an opportunity to share elements of our research with others. One other European country, France, has also carried out the same research as part of this international project.

During the first day, we were in a working group with delegates from the French research team. This was a chance to see if there were any commonalities between the findings in both countries. As the workshop developed we began to see many links and commonalities. We found out that both countries had identified similar aspects of poverty. We both identified many dimensions to poverty; and the relationships between the different dimensions are clear and interconnected. We were saying the same things about poverty.

This workshop was really interesting and working together being from two countries was something special. Both research teams had carried out the field research in slightly different ways, but we were both were following the same methodology. This workshop helped me to see the importance of working together.

Going to the EU as a co-researcher was important to me and I was proud of it.

What was the main part of the conference like?

In the first part of conference, we had a small working session with members of the European Commission, professionals in the field of statistics and indicators, NGOs (non-governmental organisations), academics, and other guests from the anti-poverty sector.

We got some good feedback after the workshop, it was recognised that it can sometimes be hard to speak up in this setting if you don’t have confidence. I felt confident this time and …. I didn’t mind it so much. I feel like I have grown in confidence over the years… at the beginning, I would not say ‘boo to a goose’, but now I’ve been coming to ATD Fourth World for over ten years and my confidence has grown. Back then I wouldn’t speak out, the nerves would have kicked in, I could have only read off a written text or script, but now I feel that I can speak from the top of my head. Even though I did read out a text I wrote, I could work off it and add bits.

This is due to the support from people in ATD Fourth World, from people in the team and other activists. The peer support is really important. For example when I saw others with more experience speaking out, I saw them speak naturally from the heart or from the head. I learnt from others how to conduct myself in public, not to be ashamed by what I say and the experiences I share. I learnt to give voice to other people’s struggles and suffering and also share from my own experience; but at the same time I’ve also learnt that you should only say the things that you are comfortable with.

Because I felt prepared and knew about the research project, I could fire off questions to the guests. I could get the point across about the need for people living in poverty to be involved in developing indicators. One of the commissioners thanked me for sharing openly on this point. He mentioned that it should be something done in the future, and that people with an experience of poverty should be included from the grassroots up.

What was the second part of the conference like?

In the afternoon we all came together in the large conference room with many guests, MEPs, and commissioners. There were two MEPs from the UK

This part of the conference was important. I do not just represent myself I represent others that are in poverty who might not be ready to speak out; but if I can get the points across to these people who have the power to make a difference, it can be a win-win situation

Talking to the UK MEPs like Jean Lambert was important because they can take things back to others in Parliament and share the learning.