At the National Theatre: ‘Faith, Hope and Charity’ 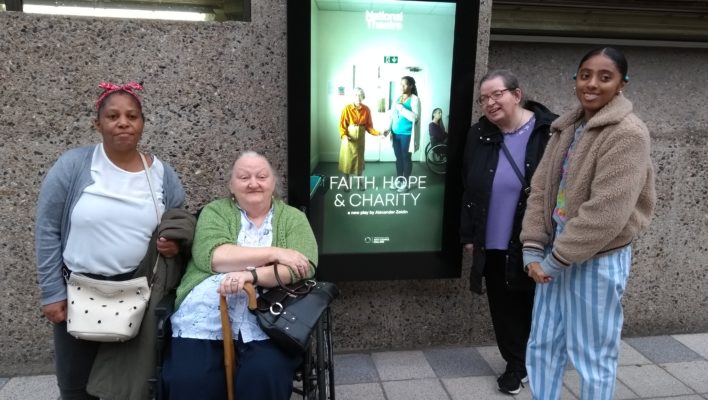 ‘In a run-down community hall on the edge of town, a woman has been cooking lunch for those in need. A choir is starting up, run by a volunteer who’s looking for a new beginning. A mother is seeking help in her fight to keep her young daughter from being taken into care. An older man sits silently in the corner, the first to arrive, the last to leave. Outside the rain is falling.’ The play ‘Faith, Hope, and Charity’, performed at the National Theatre in October 2019, was written by Alexander Zeldin in consultation with several ATD Fourth World activists. Below, two of them describe their experience of being consulted and then attending the play.

We got told there was a guy who would be coming talk to us about our experiences. He came several times. I didn’t realise how long it would take him to put the play on. It was about a year because they needed funding to get it off the ground. They spoke to other groups besides us, as long as a group had experience with food banks because the play is set in a community centre that has a food bank.

Their place needs badly to be repaired because the roof is leaking. But the council wants to close it down. It’s such a shame when a community loses a place that people have got used to having. One woman in the play is also dealing with social services who want to take away her daughter for adoption.  It’s horrible — and very true to life. The food bank in the play reminded me of a food bank I had to go to, where you could have tea and coffee with people and then also get groceries.

One woman in the play who works at the food bank is absolutely brilliant. She’s trying to keep up everyone’s spirits, and she even brought in clothes for them — but she’s so stressed out herself. At one point, she needed a minute to herself. You could really see how much was weighing on her.

Two of the characters remind us of people we know, because they like helping other people, but also in the things they said and their whole way of being.

It’s a really good play! We really enjoyed seeing it and also being consulted about it

This article is drawn from a conversation with Angela Babb and Patricia Bailey. For more information about the play, please see the National Theatre website.