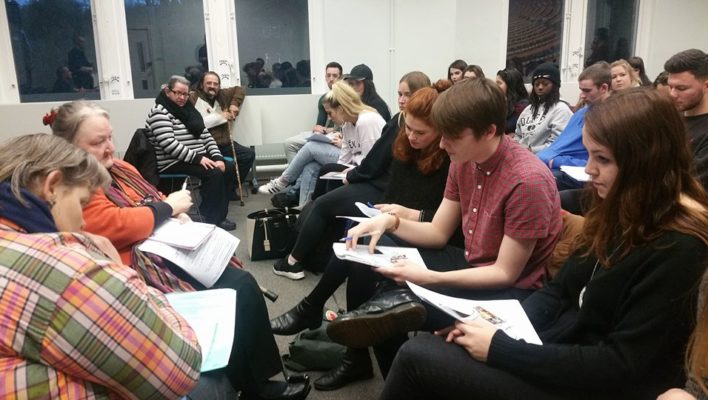 In this blog post I would like to share with you two examples of what poverty is and what living in poverty can feel like and I also wanted to share an example of why it is so important to stand up and speak out about poverty.

Poverty is …
Standing at the school gates waiting for my child to finish for the day
Trying to fade into the background noticing the glances nearing the nasty comments, praying the bell will go so we can get away.
Knowing in my mind I’m not what people say, I’m just unlucky the jobs don’t have the pay that is needed to take my debts away.
The pay you see will only go so far when all you earn is minimum wage.
Once you’ve paid your rent, council tax and utility, if you’re lucky there is a week of meals. If not you have to go see an official and tell them why you need their help and then its 50 questions just like the other month; and if you’re lucky you will be allowed to use the food bank to give your kids a meal.
So you hold your head in shame hoping no one will see you walk in the food bank once again and all because of that unexpected bill because the washing machine went wrong or shoes wore out again.

On a cold and wintry morning I pull back my frozen blanket, a sleeping feeling comes into my legs. I have to get up quickly before the pavement becomes to busy or I will get kicked away for being in the way.
Even though they only walk on it people think it is their pavement but for me it is where I have to sleep.

ATD Fourth World has giving me the opportunity to represent the organisation at a number of different events. Recently we presented The Roles We Play: Recognising the Contribution of People in Poverty (www.therolesweplay.co.uk) at The University of Sheffield. I was part of a Poverty Experts panel together with 6 other family members from ATD Fourth World.
We presented our work based on real life experience of poverty to around 60 students in a lecture room setting. It was important that we spoke directly to the students; it felt to me like a real achievement as we were given the chance to interact with students who in later life might end up being the policy makers.
If we can teach the students now that people in poverty are not just facts and figures on a report, but everyday people, then as they go through life they see people not just as numbers interacting with them.
I also learned from the students as some of them had been brought up in poverty and they told me about how they had felt about seeing their parents struggle to make ends meet.
During the session we asked the audience what poverty meant to them? I remember now their answers were very different to the answers we got when we asked academics, as some gave explanations of how poverty had affected them or a friend. Not the sort of response we are used to from older people who quite often give responses not unlike what you read in the press.
It is nice to know that the younger generation has not yet been corrupted by the press and politicians.