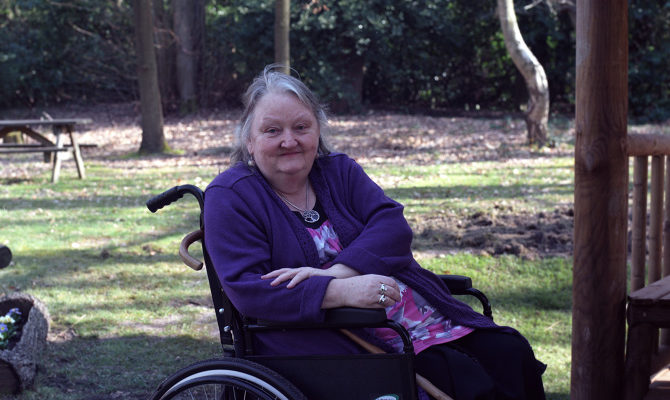 In 2016-2019, ATD Fourth World, in partnership with Oxford University, conducted a participatory international research project called “The Hidden Dimensions of Poverty”. The project took place in six countries: Bangladesh, Bolivia, France, Tanzania, the United Kingdom and the United States. People living in poverty, professionals and academics worked together to clarify how we understand poverty and its multi-dimensional aspects. On 10 May 2019 the findings were launched at the Organisation for Economic Cooperation and Development in Paris. This article is excerpted from the remarks there by Moraene Roberts, a co-researcher from the UK.

For people in poverty, our research found that the result of facing so many difficulties and so much hardship was a ‘lack of expectation and encouragement’ and the feeling that poverty is ‘like a tangled web that you can never escape’.

A further theme was that poverty can limit joy, dreams and aspirations. Here, we stress that this is a result of poverty. We are not suggesting any intrinsic lack of aspirations among people living in poverty; but rather that poverty has a corrosive effect on people’s sense of control over their lives. This theme was captured by statements such as: ‘Poverty means you are not allowed to be happy’, or ‘I’m not able to smell the flowers because the stress of life gets in the way’. Poverty can make people ‘afraid to dream’ or ‘kills dreams and cages the dreamers’.

Anger and frustration with ‘the system’1and, in particular, with social policies and structures, featured frequently in group discussions. When group participants were asked to rank the six dimensions of poverty according to the order in which they should be tackled to improve the lives of people with experience of poverty, the one most frequently cited was the dimension covering systems, structures, and policies.

The overall view was that those in positions of power make decisions with scant regard for the people affected by them. Poverty has increased, not simply through indifference to the suffering it inflicts on individuals, but through a set of deliberate actions affecting the most vulnerable. For some, poverty was seen as ‘structural power over people’, a ‘system defined by power over the people’ and ‘a form of exploitation, not a natural disaster’. Other group participants pointed out that ‘systems designed to create wealth also create poverty’ and that since our currently high rate of poverty is ‘man-made and man-managed’ it is ‘not inevitable’ and ‘could be sorted — but we choose not to.’

A slightly less harsh, but nevertheless equally damning view was that ‘politicians are so out of touch, sitting in an office making decisions about communities they don’t know anything about’ or that people who are making decisions ‘care more about numbers and not the people’. Furthermore, people described barriers ‘put in place that stop people progressing out of poverty. For example, social and economic policies are trapping people in poverty, [denying access] to benefits, to work, health, housing, and to food’.

The result was ‘a system within which no-one is held to account for the consequences of their decisions’, leading to a ‘19th century [approach] that does not fit 21st century needs’ and the ‘individualisation of a systemic problem’. Though the ‘economy has advanced’, communities were ‘left behind systematically.’ One participant expressed the view that it is not the welfare system itself that is at fault but rather that the ‘impact of austerity has destroyed a system designed to be supportive’.

A particular dislike was the dehumanisation caused by the way services are offered: practitioners should ‘look at the policies and procedures and have a person-centred approach.

Reference was made to the double humiliation of needing to use foodbanks and being answerable to staff for choices made.

Participants in the groups shared what they saw as the overwhelmingly negative impact of these policies and procedures on society, communities, and individuals. The overall view was that the resulting level of poverty has led to deliberate and blatant inequality and the routine humiliation of individuals who exist in a state of impoverishment.

Group participants considered that ‘poverty doesn’t see value in us – it stifles our growth as people’ and they were ‘disenfranchised because of being poor’, ‘neglected and failed by services’ and ’treated like cattle – you have no dignity and no identity’. Poverty means ‘being part of a system that leaves you waiting indefinitely in a state of fear and uncertainty’.

Asylum seekers appeared to be singled out for particularly harsh treatment: ‘as an asylum seeker, poverty is a punishment – you cannot have cash, it restricts choice’ and ‘the asylum system grossly limits the ways in which you can contribute to society.

Another dimension demonstrates that services put in place to support people in poverty do not always achieve their goal. This was described by one participant as ‘an intrusive but neglectful state’. Our findings also include a suggestion of how to reduce the effect of negative judgement, stigma, and blame – through listening to experience.

The peer groups who participated in the research reported that the experience of living in poverty could be described and understood only by listening to ‘complex and individual stories’. This is because ‘poverty is not always obvious; appearances can be deceptive’. Because poverty exists in so many different forms, ‘Views should not be restricted, we need to stay open-minded and keep learning in order to understand adequately’. The peer groups described ‘being judged without knowing your story’ or ‘without walking in my shoes’.

One of the effects of this stereotyping of people living in poverty is disenfranchisement People living in poverty suffer ‘disenfranchisement by distance from elite powers: decision makers, politicians, councillors, service providers’. There is a tendency to blame people in poverty saying: ‘You don’t need to be poor’; ‘Poverty means being subject to scrutiny’; and ‘Poverty means being bulldozed, being bullied, pushed away, and not wanted’.

The peer groups reported that stigma and negative judgment surrounding people in poverty mean they live within ‘an intrusive but neglectful state’. They experienced ‘Social Services taking young children away instead of helping them at home’, ‘Social Services blocking the return of a child to their parents’, ‘Social Services constantly looking over your shoulder especially when you have been in care yourself’, ‘children being wrongly adopted’ and ‘contact visits with your children [in foster care]’. Thus negative judgement, stigma, and blame resulted in the limiting of the ‘potential [of parents when] others tell them they are not worthy [of being parents]’.

Co-researchers put both structures, systems and policies and financial insecurity as fundamental causes of all that then followed. Stigma, negative judgement and blame was also discussed as a moderating cause of other consequences, whereby stigma is created by systems and structures, and then leads to wider negative consequences.

Genuine participation of people with lived experience of poverty is essential in tackling the causes and consequences of poverty. This requires time and careful planning.

This research recognises that lived reality of poverty is expert knowledge made more powerful when combined with knowledge from other, professional, sources. It is unjust to exclude those most affected from such processes. Genuine participation is important because it protects people’s rights to be involved in decisions made about them and because it extends our own knowledge about the implications of living in poverty.

The participatory design of this research has allowed two areas to stand out:

Achieving genuine participation is not easy. It is more than consultation, requiring active engagement from the start as well as both sufficient time and consideration of possible power imbalances which may prevent involvement.

1 This term does not refer only to Government policy but is meant in its largest sense because respondents used it differently.