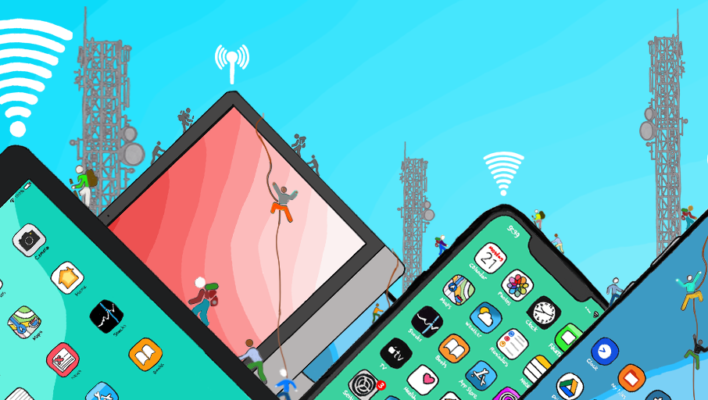 This is part of a series of blogs about how people in poverty experience the digital divide during the Covid-19 lockdown. Previous posts include: “Swallowing Pride and Feeling Locked Out; on the website of the APLE Collective* (of which ATD Fourth World is a founding member); and in this Church Action on Poverty video of Letitia Mason and Patricia Bailey speaking about ATD Fourth World’s work on digital exclusion.

“People don’t realise the life-changing impact of not having a smartphone.”

– Tricia McConologue, director of Bridging the Gap in Glasgow

Under lockdown, most people are using the internet more than ever before. For those who cannot afford the devices and wifi that could connect them, the digital divide feels wider than ever. The BBC notes that only 47 per cent of people on a low income have broadband internet at home. Both the BBC and The Guardian credit the APLE Collective for its advocacy on this issue.

Tricia cites several situations of digital exclusion. One man is an immigrant who wishes he had WhatsApp to communicate with family in his home country. She said, “He’s been banging his head against the wall because he’s so anxious without news”.

Tricia also knows families where a new baby was born during the lockdown; but lack of access to the internet prevented the parents from completing forms necessary for child benefit payments to begin.

The limits of public libraries

Even before the lockdown, when libraries were open,  short limits on computer time were problematic. Tricia knows a woman who would stand outside the library to use the wifi while applying for jobs on her phone. “Having only an hour or less to use a public computer creates enormous pressure when you have to prove that you’ve applied for enough jobs to avoid being sanctioned.”

In rural Lancashire, 17-year-old Tia also found the limits much too short for homework assignments that require extensive research. Even worse, she says her local library chose to close entirely during after-school hours.

“Lots of elderly and disabled people live here. The library saw a few young people messing up the town. They didn’t know which young people were doing it. So they started closing entirely in the afternoons.

“That meant that I had to use the library in another town. But you don’t really want to stay until dark before getting the bus home by yourself. Without computer access, you have to type out entire assignments on a really old mobile phone, which is not the best way when you’re trying to get it done more quickly.”

Elizabeth, a lone parent in London, struggled to find time to access the internet in libraries given the schedules of her children and herself. She says: “It’s a frustrating nuisance that everything is online, from Universal Credit to the children’s homework.”

Elizabeth also wishes her children could watch Netflix. She says:

“Living without the internet at home is very boring for the kids. I take them to the park — but they get bored quickly.

“So many people struggle to get by. Not having internet just makes matters worse.

“And now with schools closed, I’m worried about my children’s progress. As a parent, I give as much support as I can, but I just don’t know how it will work when they go back.”

In another London family, the three oldest children, ages 13, 10 and 8 have all been sharing their mother’s telephone in order to complete their home-schooling assignments.

Tia knows families who struggle to access free school meal vouchers that have been issued only electronically with the expectation that families will be able to print them out.

In a third family in London, where two children do schoolwork on their father’s tablet, they struggle to forward the assignments to the school. The parents also worry about their children spending too much time on screens and would prefer that schools mail printed assignments home through the post. At the same time, one of their sons hopes to eventually get a job using computers, and so they are glad that his school finally offered them use of a laptop in late April. But this is just a temporary loan during the lockdown. A family friend commented: “It makes no sense to just give him a taste and then snatch it back.”

Mike Tighe is an activist who volunteers with London Unemployed Strategies: A Voice for London’s Unemployed. While their “Know Your Rights” claimants’ support group is unable to meet in person, they try to provide information and organise social contact. Mike says: “This has been somewhat difficult, as there really are practical difficulties for those not experienced with IT. The current situation has thrown a lot of us in at the deep end. While there are glowing reports on TV of people taking to online contact like ducks to water, I suspect that only the successful get their messages out.”

He and others in the group don’t use the phone enough to justify a monthly contract, but find that keeping data topped up at surge times is a drain on finances. Mike explains some additional difficulties faced by his peers:

“Setting up a Universal Credit claim on a small touchscreen and entering lots of details is difficult to do accurately. I always have the feeling that design of websites is done on high-end machines with big monitors or display screens. Most sites do not scale down well to hand-held devices. Particularly the earlier generation of mobile screens — common where income is limited — can’t render useful amounts of text legibly. In the current crisis, there are lots of resources online and direct-mailed from various agencies.

“This is largely helpful; but the sheer volume can make it difficult to navigate and absorb the information. Keeping tabs on so much information is surprisingly difficult on a mobile device.”

In addition, Mike is concerned that some public sector offices send out documents in proprietary formats or web pages with hyperlinks that not all devices can open or view. He notes:

“The current crisis really highlights how easy it is to be excluded from the torrent of vital, well intentioned, but largely inaccessible help. Those hyperlinks are difficult to input manually. Most devices allow some cut-and-paste function. But on a small screen with big fingers and possibly limited dexterity, that is also difficult, even if the user is aware of that facility. (Very few users are familiar with all the functionality of their devices).

“Even some mainstream and commonly used apps have nightmarish terms and conditions. Working through the opt-outs is (deliberately?) difficult, especially on a small screen or to someone with limited knowledge of the effects some choices can have. In the last few weeks, my mailbox is full of spam and junk e-mail. I suspect that someone in my circle has failed to opt out of sharing their address book with whatever ‘free’ apps they are using.”

“Just progressing from link to link can lead users into some fairly murky territory quite quickly. There is an industry dedicated to exploiting this with what are basically spam and clickbait messages.

“Without the time, resources or skills to carry out one’s own fact-checking, these things are difficult to assign a ‘confidence rating’ to. There is a vulnerability to believing stuff just because it is there and / or because there is a lot of it.”

In Glasgow, Tricia and other advocates for people in poverty have convinced some businesses to keep their wifi on throughout the lockdown and to allow anyone who needs it to tap into their network. One internet cafe in London reopened in early May. However their printing fee of 20p per page is prohibitive for families who struggle to print out worksheets for several school-age children every day.

Tia points out how many kinds of opportunities pass by people without internet access. She regrets having missed out on contributing to a podcast where she was asked to speak about her volunteering and advocacy work against hunger with Church Action on Poverty. She thinks that teachers should stop assuming that all students can use home wifi for their homework. Even better, she says, would be to provide all students with access to tablets and wifi. With more access to the internet, her goal is to create her own blog to tell people what life feels like for her in a very small town.

Angela is an activist in Islington who sees access to social media as a crucial way to check in on how people are doing. She asked ATD Fourth World to record her singing on WhatsApp and to share the audio file on Facebook with this message:

“I know it’s hard for everyone right now. It’s good to find out what’s going on and that no one is feeling alone and make sure everybody is okay. It’s nice to stay in touch. Everyone has got to keep their spirits up. We’ve got no choice. If you’re sitting, worrying, then it plays on your mind. We’ve got to try and keep busy.

“We’ve just got to look after each other. It can be something simple like sending a message, a phone call to family and friends just to say hello, or wishing someone a happy birthday. We’ve all got to try and stay positive. We’ll beat this.”

Thanks to On Road Media for support with this article.

We invite you to follow the APLE Collective, to get involved, and to contribute to our campaigning.

#BruisedBabyPolicy I found another 28 policies assume any bruise in a premobile child indicates they are suffering or likely to suffer significant harm and call a strategy discussion without the social work assessment required by statutory guidance https://www.gov.uk/government/publications/working-together-to-safeguard-children--2 7/11