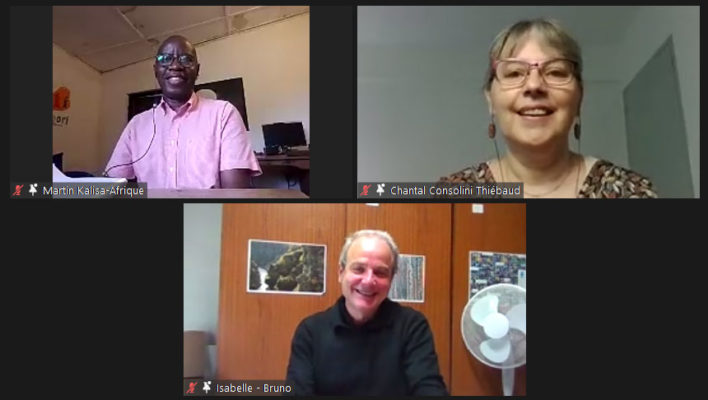 On 23-24 June 2021, the International Movement ATD Fourth World held its annual general meeting via Zoom. Board members voted to elect a new International Leadership Team: Bruno Dabout, Chantal Consolini Thiébaud, and Martin Kalisa, who will take up this role beginning next 18 October. The Board also adopted this annual report. As the representative of ATD UK on the international board, Thomas Mayes presented points in that report that came from the UK and also gave recent news. His remarks are below.

ATD Fourth World UK is part of the Addressing Poverty with Lived Experience collective, or APLE. In 2020, they started a campaign on digital exclusion.

In the first stage of building the campaign, ATD activists were supported by groups within APLE and people and organisations outside APLE to collect data and to carry out research on how the digital divide has affected people’s daily lives. Dan Farley, a graphic designer, helped with the research by creating a questionnaire in the form of a leaflet with visuals. 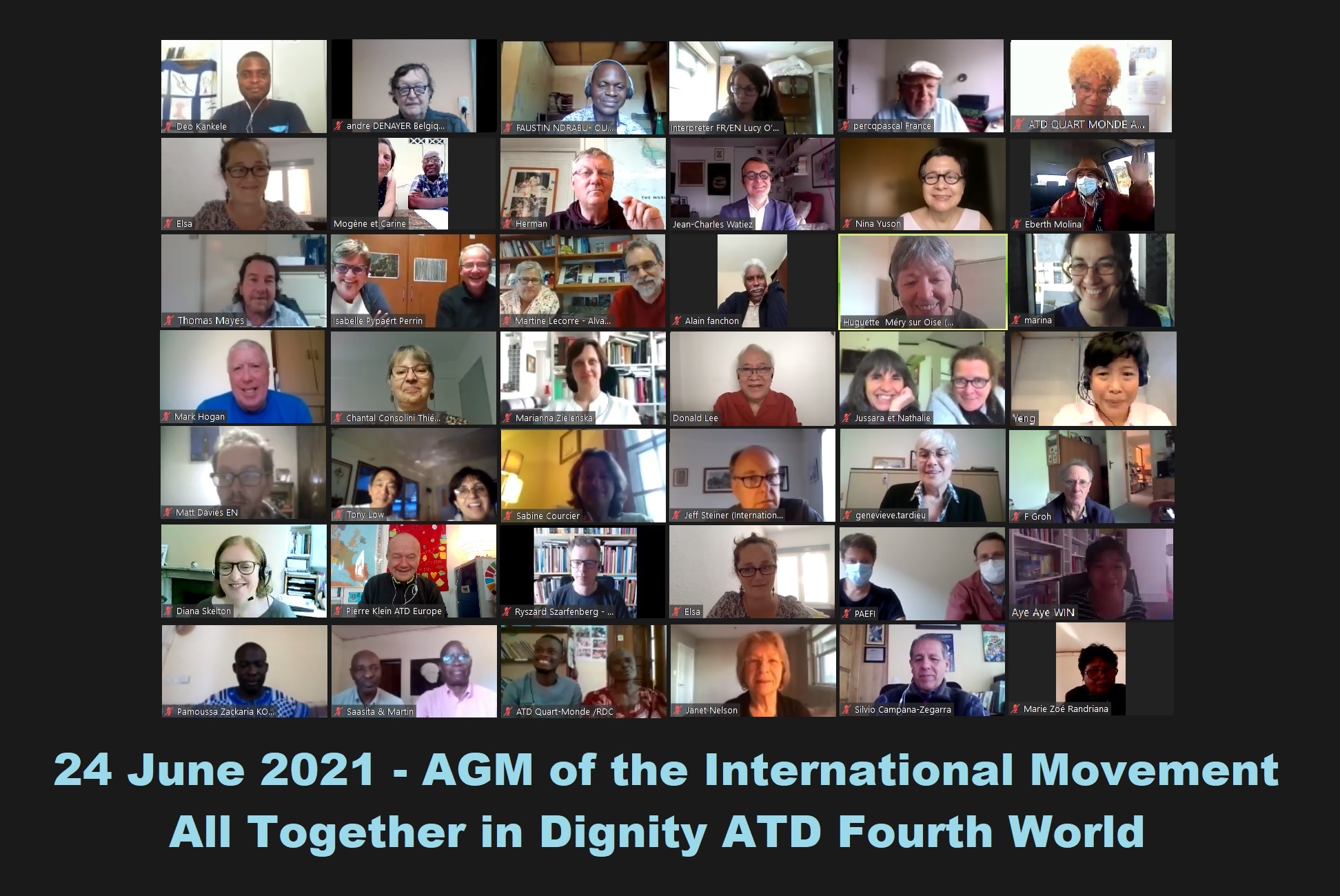 Trapped in the digital divide

Accessing services you are entitled to isn’t straightforward, and it has got worse with the pandemic. Now, a lot of GPs are only accepting appointments over email. To book, you need to write an email explaining your symptoms. Based on the symptoms you are describing, they will decide if you need to come to the practice, if they need to arrange a phone appointment, or if the nurse will call you. That can take up to four weeks.

What if you don’t have an email address? This can lead to situations where people are left with having to ask their neighbour to make an appointment for them.

And what if you have an email address but no access to the internet or data? People used to be able to sit in a café and use their wifi for free. With the pandemic, cafe closed. Many suspended their wifi subscription during that period to avoid paying a lot of money for a service customers couldn’t use and they are not up and running again yet.

Remote justice for families with a child in care

The pandemic has also affected families with children in  care. ATD Fourth World UK has been a member of the Parents, Families and Allies Network, or PFAN, since it was created in February 2020. During the pandemic PFAN led a consultation to understand how families had been impacted by remote justice.

One key issue parents highlighted was a lack of access to legal help because they couldn’t be in the same room as their solicitor. When justice happens remotely, parents can’t have a private conversation with their counsellor because the judges are on the same call. Sometimes, the judge says something parents want to react to, but they have to wait until it is their turn to talk. If they were in a court, they could tap on the solicitor’s shoulder to have a five minutes recess with them. The solicitor could then pass on their question to the barrister who can raise the point when it is their turn to talk. In remote hearings, your independence is taken away from you to raise questions with your solicitor. 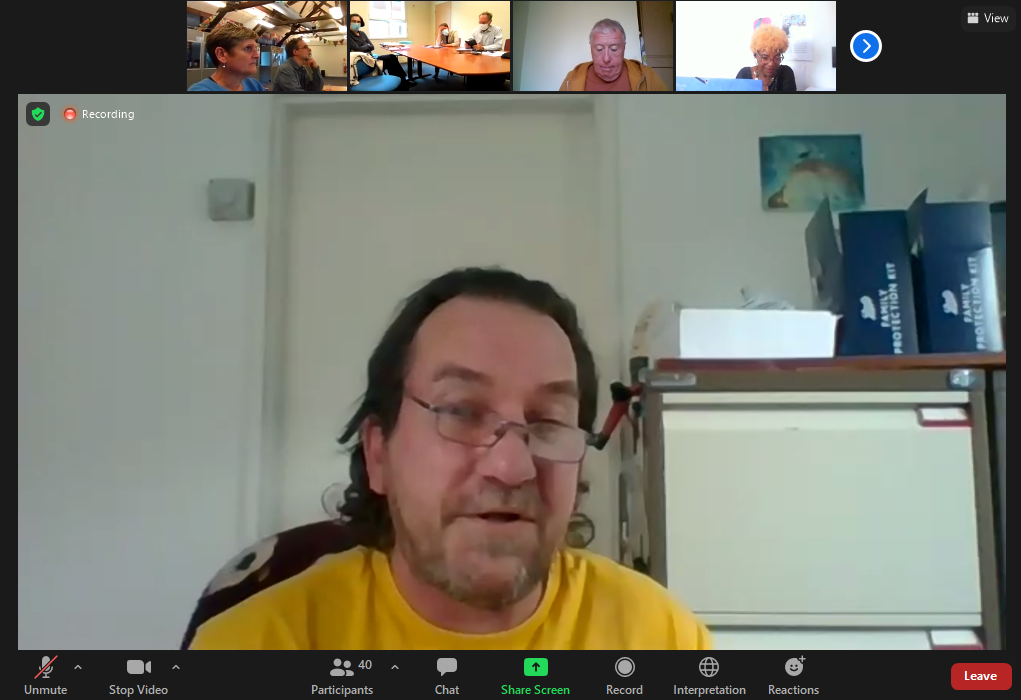 Thomas Mayes speaking to the board.

Poverty2Solutions is a group of three charities working together to find solutions to poverty. They are pushing forward to work in participatory ways with people in power to address different aspects of poverty.

Recently their focus has been on debt deductions, which means money owed to government that is taken out from claimants’ benefits. These deductions lead people to have to turn to foodbanks or going without gas and electricity, because they are left without enough money to survive.

Deductions can be taken from benefits for a range of reasons including repayments of an advance for Universal Credit (UC) benefits (which is a loan to tie new claimant over the five weeks wait for a first UC payment) and legacy benefit overpayments (debt that arose due to systemic design flaws in the system).

87% of UC deductions are to repay for a UC advance payment, in other words a loan granted to new claimants to tide them during over the five-week wait for a first UC payment.* Many people are also paying for legacy benefit overpayments, in other words debt that arose due to mistakes made by the government that people knew nothing about. Deductions are taken at a big percentage. [It stands today at 30%, down from 40% in beginning 2018. It is due to be reduced to 25% by the end of the year.]

Poverty2Solutions is planning to attend the Conservative Party Conference that will take place in October 2021. The aim is to get some politicians interested in what they are doing and work in partnership with them. They hope to hitch on the promises the Conservative Party made during the electoral campaign to leave no one behind.