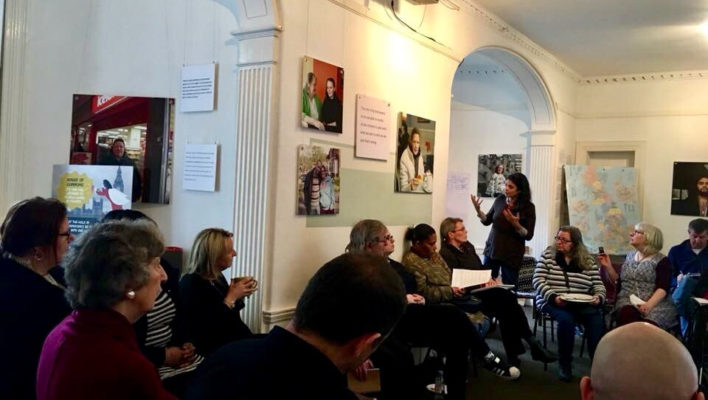 This blog post was written in April 2018 by Guy Shennan, chair of BASW, the British Association of Social Workers.

I have written this blog post with support from Dann Kenningham of ATD Fourth World, an organisation I have been delighted to get to know and work alongside over the past two years or so. It connects with the BASW-commissioned Adoption Enquiry and the need to continue discussions prompted by this, and also with our development of an Anti-Poverty Practice Guide.

Giving Poverty A Voice
I first heard of ATD Fourth World as we were preparing for the social work summit that took place in January 2016. We wanted to begin this summit, which included policy makers, senior managers, politicians, academics and civil servants, with voices from the two most important groups in social work – social work practitioners and people who use or have experienced social work services.

​Professor Anna Gupta of Royal Holloway, University of London, introduced us to ATD Fourth World, a human rights-based, anti-poverty organisation which works in partnership with people affected by poverty. Part of its work involves supporting families and a number of parents who first meet ATD Fourth World in this way become activists themselves within the organisation.

Two such activists, Amanda and Seamus, both of whom have experienced statutory social work intervention, spoke at the summit, and the messages they conveyed were crucial ones at the outset of an event aimed at building social work strength and unity. Relationships between social workers and families were all important, through which social workers could provide the help and support needed, in ways that were understandable and acceptable to the families concerned.

It was good to meet Amanda and Seamus again, as well as other ATD Fourth World grassroots activists and team members, social care professionals and academics, at a Social Worker Training Programme Study Group held last month at their National Centre in South East London (summaries from previous Study Groups are available to download here).

The main focus of the session was the recent release and findings of BASW’s The Role of the Social Worker in Adoption – Ethics and Human Rights: An Enquiry. This research highlights how austerity has exacerbated the difficulties parents have in caring for their children and the issues social workers face in providing support to families and so the discussions aimed to examine the connections between parenting, family support, adoption and inequality, drawing on the participants’ personal experiences.

We talked in small groups about when poverty had not been seen by social workers, and when it had been seen. Much of the time, poverty can be invisible simply because it is always there.

One parent spoke eloquently about how poverty has affected her children’s access to education. At a case conference, the school had complained about her daughters being late for school, or missing it altogether. This was because they had no zipcards and it wasn’t easy for their Mum to obtain them, especially with no computer and no email address, when they have to be applied for online. People might not consider all the costs involved either, from replacing lost birth certificates to buying passport photos, which is not easy when you’re working out how to pay off rent arrears and debt.

​I’d like to think that social workers would not be among the people who wouldn’t think about these costs, and what they mean for a parent living in poverty, though in this case the mother didn’t recall the school or social workers asking if they could help. So she asked ATD Fourth World for support, and the girls ended up getting their zipcards. One of her daughters has now passed her exams and is studying art at college and her mother is very proud of her.

Another parent, whose son had been adopted five years ago, spoke about his family’s difficulties with letterbox contact, with letters not being received, and about long waits to hear back from social workers. When a social worker from the post-adoption team did get involved, she was able to sort the contact out quite easily, which left this birth father wondering why this hadn’t been done before. And why there wasn’t better post-adoption support, even if simply to help birth parents write letters to their children who have been adopted, which can be “the hardest thing you can ever do”.

We then split into small discussion groups to consider one of key recommendations of the BASW report: that “the current model of adoption should be reviewed and the potential for a more open approach considered”. The themes that developed in the group I was in were about the interplay between adoption and inequality, and cultural expectations about how open or closed permanent alternative care for children should be. On the first of these, concerns were expressed that the children who were removed from their families and ended up being placed for adoption, tended to be from poorer families. If their adoptive family was better off, which was thought to be likely, then one effect of this could be felt many years later, if the adopted child once grown up had contact with their birth parents. It could be a shock to the adopted person to find that they had grown up in a different class and culture than that of their birth family.

These reflections on difference and inequality led to the group wondering if the prevalence of adoption was greater in more unequal countries. This led in turn to a consideration of the different practices in different countries, with the UK being unusual in having a relatively high number of children adopted from care, and then not having direct contact with their birth parents. If more open adoption is more common elsewhere in the world then this suggests it could become more open here in the UK. It would, however, require sizable shifts in societal attitudes and expectations.

When the time came for feedback it became clear that the other small discussion groups had debated, amongst other themes, the need for more and better post-adoption support for birth families, the need for post-adoption contact to be viewed positively and encouraged whenever possible and also the birth families’ needs for independent advocates who can remain with them throughout the statutory process.

There was a parent advocate in the discussion group I was in, and it would be good to think that such a service could be available to all parents who find themselves at risk of losing their children. There are excellent examples of such peer advocates in New York City (Tobis, 2013).

It was a rich conversation, made all the more so by the presence in the group of people who have had direct experience of these issues, either as parents or as close relatives of adoptive parents.

BASW’s main commitment, following the publication of the findings of the adoption enquiry we commissioned, was to ensure that discussions continued, with all stakeholders and across the UK. These are not easy conversations to have, and the fact that ATD Fourth World continues to facilitate the types of spaces where such conversations can take place is both commendable and crucial. I witnessed an event in which great care was taken of people by the facilitators, and in which the participants also took responsibility for themselves and each other.

As a social worker and the Chair of our professional association of social workers, I want to encourage practicing social workers to join with families in attending sessions such as these. It could be seen as CPD for social workers – and genuinely, as there is much to learn – but I think too it could be part of actual work done with families. Taking part in exploratory discussions about the impact of poverty on families, parents and social workers together, has the potential to have an emancipatory effect on both sides. Bearing in mind the messages from Amanda and Seamus and others, about relationships being all-important, there is much to gain in building relationships through learning together.

I don’t know whether this would be an activity that the managers and employers of our social workers would see as valid in work time, but I believe it should be. BASW is currently developing an anti-poverty practice guide, and I hope that this can include in its guidance suggestions that social workers reach out and take advantage of discussions such as the one at ATD Fourth World, and learn about the impact of poverty alongside the parents they are working with, including from those very parents.
Tobis, D. (2013) From Pariahs to Partners: How Parents and their Allies Changed New York City’s Child Welfare System. Oxford: Oxford University Press.