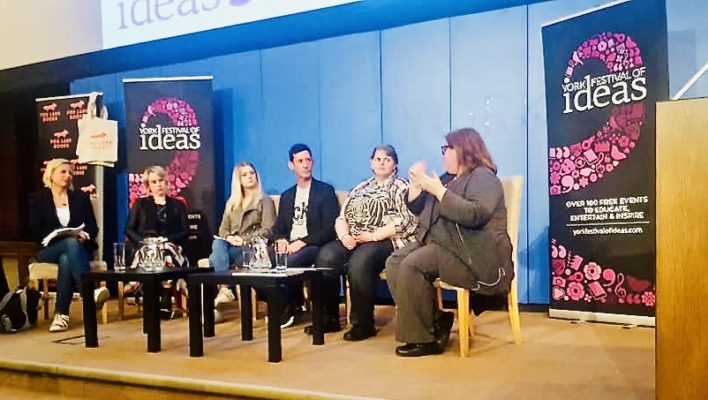 Abigail Scott Paul is at left; Amanda Button is second from right.

On 13 June 2019, Amanda Button and Diana Skelton were invited to represent ATD Fourth World on a panel about ‘Activism and Action‘ organised by the Joseph Rowntree Foundation as part of a Focus Day on ‘Poverty: How Can We Tell a New Story to Inspire Change?’

JRF’s deputy director, Abigail Scott Paul, introduced the day: ‘I want you to think about a story that has stuck with you — a story that made you feel something; a story that made you stop and think; a story that could have even made you think differently about someone or something. The story that sticks in my mind is one that I heard only last week. […] These two women were constrained by poverty. Yet there they were, running a workshop to unlock opportunities for others and their communities, supporting them to tell their stories in an effort to open up minds and create change. I was blown away by their determination, courage, dignity and optimism. And yet this isn’t always the story you read or hear. For the past ten years, we have seen a plethora of stories in the media, also spouted by politicians, that have been hugely damaging towards those locked in poverty. It’s been a story of blame and shame; a story of demonization pitting the ‘deserving’ against the ‘undeserving’; the ‘striver’ against the ‘scrounger.’ […] It’s not right that these stories get in the way of people’s understanding; and more damagingly, in the way of change.

‘But rather than throw our hands up in despair and give up, we need to work together to tell new stories about poverty in the UK: stories like the one I described that can make us feel compassion; stories that allow us to see the injustice of 14 million people trapped in poverty in the UK; stories that allow us to see that change is both necessary and beneficial to us all. […] We live in a compassionate society. We are a country that believes in doing the right thing for our fellow citizens. Today is about working together on the stories needed to fight the injustices facing people who find themselves trapped in poverty. Storytelling can play a critical role in painting a new, more authentic picture of poverty, and in doing so can build the public will to solve it. Today is about devising new, irrefutable stories that make people sit up, listen, and crucially take action for change.’ 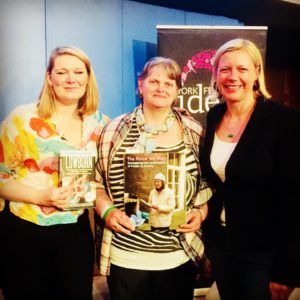 Diana Skelton introduced Amanda Button, saying: “ATD Fourth World has a long history of turning activism into action here in Britain. Back in the 1990s, it was ATD that convinced Parliament to found an All-Party Poverty Group — and this became the first group where protocol was broken to allow ordinary people to speak from their lived experience before MPs even opened their mouths. But it takes a lot for people living at the sharp end of poverty to get involved in public speaking. Moraene Roberts, who has lived in poverty her whole life, says:

‘Society always tells us it’s our fault we’re poor, so we can feel full of self-blame. But once you begin meeting with others who experience poverty too, you see that some things happen because of the system. And once ATD had offered me help, I wanted the opportunity to give something back. So now, whenever I will have an opportunity to speak out, I feel delegated to speak on behalf of others who might never get a chance to speak out.’”

‘It’s true that we’re delegated to speak out for others. There are dozens of people who helped put together “The Roles We Play” and who can’t all be here today. And there are thousands more who have been stuck in the same position as us and who never get the chance to speak out. So it’s a real privilege for me to be here representing them. As activists, we carry them with us so that they have a voice too.

‘The beginning of the path from poverty to activism to action starts with dignity and respect. Just when families in poverty need the most support, social services can be judgemental, breaking the family apart. This is not right. It is out of order. Social services are meant to be there to be a lifeline for those families that need help because they are living in poverty. But the judgements start before parents have even been met as people when social workers read their file. The parents don’t get the chance to explain the situation they’re in. Being judged makes parents fear asking for support when they need it because they could be misunderstood and attacked. This sets up a cycle where parents who need support are afraid to ask for it. Then, because they don’t get support, their case goes into the court arena. Once that happens, 80% of families will get separated. And after the family is broken apart, parents are left to fend for themselves.

‘This is out of order. Social services can and must be redesigned for the better with the contribution of families in poverty. And people in poverty should not be attacked and left to fend for themselves. At ATD Fourth World, as parents that have gone through the experience of having social workers involved, we are able to help a lot of other families that are facing social work intervention. We help them to be able to come out the other side and not to feel ashamed of themselves. That way they are able to go out into society and hold their heads up high with dignity and respect.

‘One of our first public events presenting “The Roles We Play” exhibition was at the Glasgow City Council Hall. And it turned out that a European MP heard us there, so next we were invited to present it in Brussels at the European Union. I had agreed to speak there, but I didn’t know that there would be social work practitioners from Poland in my group. I was ranting about social workers — but it was too late because what I’d said had already been recorded on the dictaphones. Then we went into the big meeting where no one had warned me that as soon as I started speaking my face would appear on every computer screen around the room. That was a shock! But I plunged in anyway.

‘I was talking about social workers and local councils. Those are my pet hates, because we potentially pay the wages of the social workers and the local councils; but when they don’t do what they should, where’s the accountability? Then someone in the audience said, “Well, I’ll take that back to the other members of the European Parliament — but I might get shot for it!” Maybe I got carried away by criticising the local councils. But MEPs are a higher power, and when I see a problem, I don’t fiddle around with monkeys — I go straight to the organ grinder!

‘This winter, I was back in Brussels again for another meeting with the MEPs. A stats guy gave a speech about all his research monkeying around with numbers. So when we could ask questions, I put my hand up to ask him: “Have you ever considered involving people who live at the grass roots when you do research so that you get a truer picture than you can with just numbers?” He said: “I’ve never thought of that.” And later, he came up to thank me for having been the only one there who was prepared to ask him a question!

‘Going out to speak publicly about poverty is hard. You know when people are judging you. You know when people believe that there’s something fundamentally wrong with you. Poverty strips away your humanity. But when we came together with others to create “The Roles We Play”, it gave each one of us a sense of pride. Our public voice has been strengthened because we came together in numbers. You feel honoured in your soul. It’s our saving grace.’