“We Want to Be Included in the Final Say” 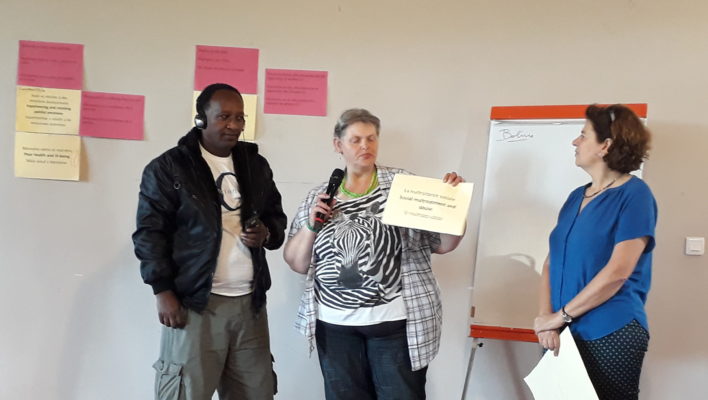 In 2016-2019, Amanda Button was a co-researcher exploring “The Hidden Dimensions of Poverty” in six countries. On 14 October 2019, she and other co-researchers launched “Understanding Poverty in All Its Forms“, the British report about this work. This article is an extract from her speech at the launch conference. It was first published on “UK Poverty: What’s the Problem?“

In October 2019, ATD Fourth World launched their participatory research project that looks at how we can develop an understanding of poverty in all its forms. I have been a part of this project from the beginning and involved with ATD for much longer. More than ten years ago, I met ATD Fourth World. It’s where we can come out the other side of poverty. We come together with others in a way that makes each person feel honoured in their soul. It’s our saving grace knowing that even if we screw up along the way, we can always come back and start again. Each of us has a backbone to stand up for what’s right—and together, we’ve got strength in numbers.

Three years ago, when I got asked to become a co-researcher for this study, I said yes because I believe that people with lived experience of poverty need to be around the table. More than that, we need to be in the forefront every step of the way. But when I said yes, I had no idea what I was letting myself in for! Research can fry your brain!

I do feel like I have grown in confidence over the years. At the beginning, I would not say ‘boo to a goose’. Back then I wouldn’t speak out in an auditorium; the nerves would have kicked in. This changed, due to support from people in ATD Fourth World including other activists with lived experience of poverty. Peer support is really important. I learnt from others how to conduct myself in public, not to be ashamed by what I say and the experiences I share.

I do not only just represent myself. I also represent others that are in poverty who might not be ready to speak out. I learnt to give voice to other people’s struggles and suffering and also share from my own experience; but at the same time I’ve also learnt that you should only say the things that you are comfortable with. Now I feel that I can speak off the top of my head.

But working with the other co-researchers on this study took a lot more than just confidence. All of us have different experiences and all of us have different ideas. At the beginning of the research, I got called a renegade! We were meeting with the co-researchers from five other countries and someone suggested that a few people go off and work on the final results without the rest of us. So I banged my hand on the table and said the word NO. We want to be included in the final say. The next thing I knew, the translator and our table wrote the word “no” on paper and she asked other translators to write “no” in Swahili, French, and all the other languages. Then one of the international researchers said to me: “Go on, then.” “Huh?” She nudged me and the other activists from my peer group to parade around the room with the sheets of paper until the academic who made the suggestion was cowering and almost fell off his chair!

But that academic is quite cool, actually. If he had wanted to, he could have said “It’s my way or no way!”, stormed out and quit. Or we could have decided it wasn’t worth the trouble. But in the end all of us agreed to work together at every step of the way.

And we found a lot of ways to do that. We had meetings in lots of small groups and in one big group. And we could also talk informally over meals and coffee breaks. There were a few times where we could agree on a main point, even though a few of us still had other points in mind that were not agreed on. And so we had to learn to just park it. We weren’t afraid to say “no, I don’t agree” because we could always say, “let’s leave that bit for later” and carry on the discussion. We could have a bit of disagreement and set aside some points for working on in the future. That made it possible for all of us to work together on the parts we did agree on.

This research was also hard because we collected so much data and technical jargon. When we had different quotations and aspects and dimensions from the 13 different peer groups laid out all over a giant table, there was so much of it to think about all at once. Andrea (another co-researcher) and I just looked at each other saying, “Huh?” That’s when I wanted to run out the door! But I also quite enjoyed getting to meet with people from other countries to see the commonalities and be able to merge our findings with theirs.

We’ve spent three years on this research, and now we’ve finished it—but our work is just beginning. Now we’ve got to knock on doors to get people to listen to us so that they understand more about poverty and so that we can figure out tangible solutions. 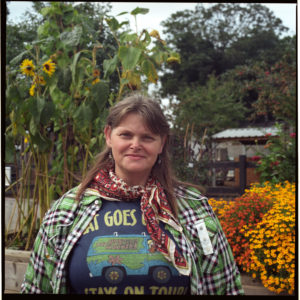 Amanda Button, photographed in 2009 by Eva Sajovic for The Roles We Play: Recognising the Contributions of People in Poverty.