Skip to content
Home > Understanding Poverty In All Its Forms > The Six Dimensions of Poverty: Ripple Effects Cut Lives Short 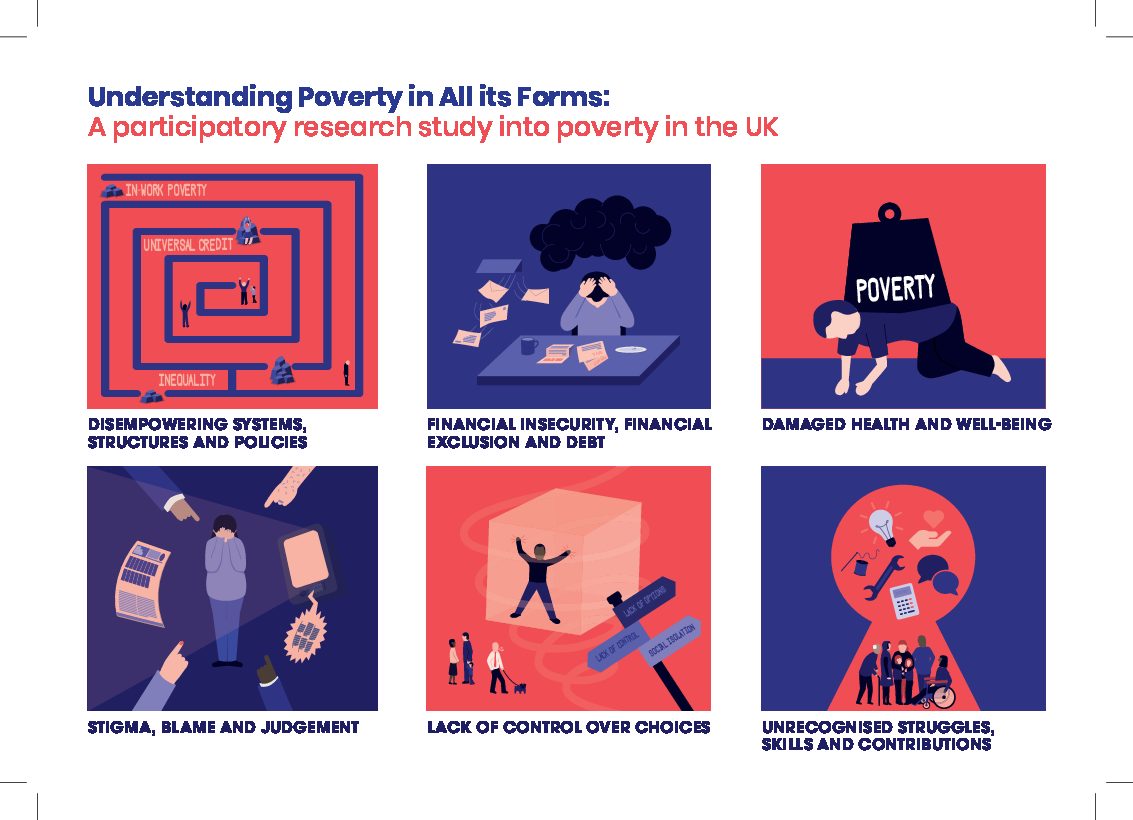 On 14 October 2019,  during the launch of the findings of “Understanding Poverty in All Its Forms” at Amnesty International UK, co-researcher Thomas Mayes presented the six dimensions of poverty determined by the research.

We uncovered six dimensions of poverty during our research:

“Poverty means being part of a system that leaves you waiting indefinitely in a state of fear and uncertainty.”

“In the system, you are a number instead of a person. You are dehumanised.”

Economic, political and social structures can cause poverty. Policy is operated in a way that disempowers. Systems designed to support people are not working in ways that people want. Systemic cuts in funds for needed services have exacerbated inequality.

People spoke to us about a broken system that doesn’t meet people’s needs. Sometimes the system is even viewed as bullying or unnecessarily harsh. A good example of this are job centre sanctions, or hostile interventions by social services.

People felt that policy makers were very remote and that they didn’t understand people’s lives well.

“Poverty feels like you’re on the outside looking in – you cannot afford to take part.”

“If you are starving, it is difficult to think about anything else.”

“Poverty is worrying about money all of the time.”

Financial insecurity means not being able to satisfy your basic needs. Worrying about money every day causes huge stress and misery.

The cost of living is going up; but benefits are going down or are capped. Even with good budgeting skills, people told us how they couldn’t make ends meet and that they could be floored by an unexpected bill that needs paying with money you just don’t have. This often leads to debt, having to borrow from friends and neighbours. Many people said they had to rob Peter to pay Paul. 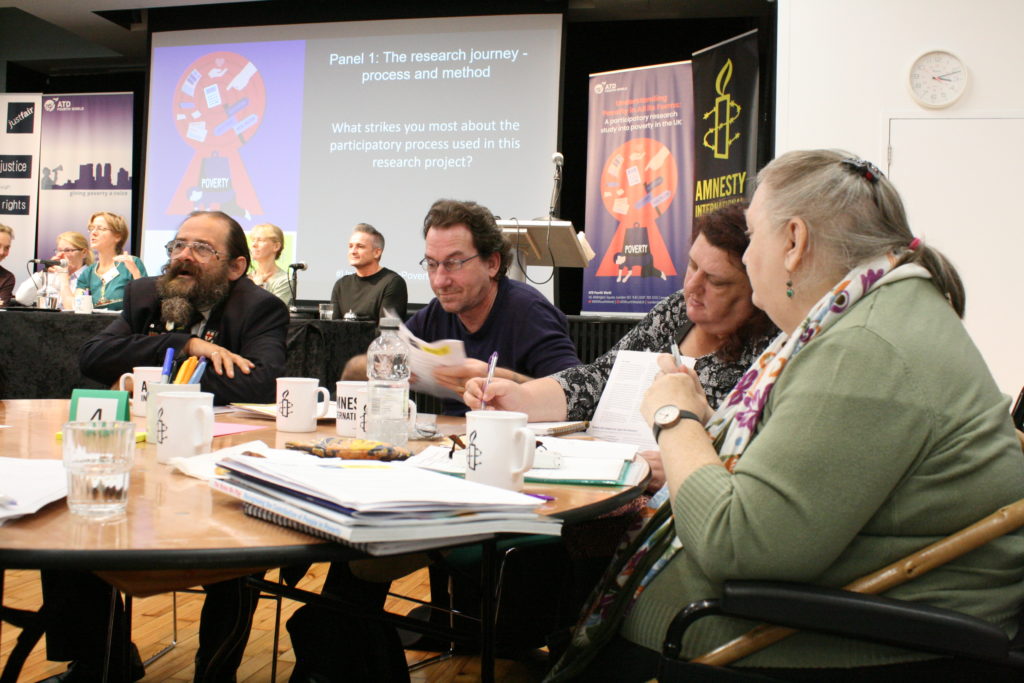 Above: Thomas Mayes, third from right, at the conference launching the research findings

“Poverty is not being able to smell the flowers because the stress of life gets in the way.”

“Poverty makes you feel lost in the fog, not knowing if you are disconnected or cast adrift.”

Poverty is bad for health and can shorten your life. It has a negative impact on physical, emotional, mental and social well-being.

Poverty can cause problems with your health and well-being in many ways. Stress can lead to depression. Not being able to afford healthy meals or have the means to cook fresh food can lead to ill health and a lack of energy. This affects your life at home and at work. Children can struggle to concentrate at school. We were shocked by how often people described traumatic experiences and by the burdens they were carrying. Many people insisted that poverty cuts lives short.

“Poverty is feeling that you are a burden, that you do not contribute to the economy and to society.”

“Poverty means being bullied, bulldozed, being pushed away, and not wanted.”

“Being in poverty makes you feel ashamed.”

Misrepresentation about poverty in the UK and a lack of understanding lead to negative judgement, stigma and blame, which are deeply destructive to individuals and families. Prejudice and discrimination result in people in poverty feeling they are treated like lesser human beings.

It only takes one incident of someone abusing the system for some of the press to jump on it and tarnish everyone on benefits. People complained about being viewed as dossers or lazy. Your post code can be a source of discrimination, as can your appearance if you’re struggling to keep on top of life. What really affected us as co-researchers was to learn how much people blamed themselves and felt guilt about their situations. Too many people believe that poverty is their fault.

5. LACK OF CONTROL OVER CHOICES

“Poverty means your horizons being hugely restricted because your focus is on survival.”

“Poverty is a dungeon of boredom, staring at the same four walls, chained up in a place where nothing happens.”

“Poverty is a spider’s web, almost impossible to get out of.”

Poverty means a lack of control over choices and opportunities. Over time, this can lead to increased social isolation and risk, as well as restricting people’s social, educational and cultural potential. The lack of good options reduces people’s control over their lives and traps people in repetitive cycles of hardship, disappointment and powerlessness. Poverty is dehumanising.

People told us that because of poverty, they missed out on so many things, such as a night out with work colleagues, or children unable to join their friends on school activities. Sometimes people said they were only left with bad choices. People also spoke about endless days of boredom with nothing constructive or pleasant to do.

“Poverty means having to break down barriers and be resilient.”

“Families in poverty aren’t recognised for the wealth of life skills they have.”

“In poverty, we might sometimes feel broken by experience, but we are generous in spirit, solidarity and community spirit.”

We heard that people find all sorts of ways to make a difference in their communities and through helping family, friends and neighbours. For example, they might look after a neighbour’s children while the neighbour goes for a job interview. Volunteering with charities or through local religious groups is a way for people to feel constructive. People also feel that they have good ideas about how to improve things; but their voices are seldom heard.

When we asked people about the connections and relationships between these six dimensions, most people saw “disempowering systems” and “financial insecurity” as the main drivers of poverty. Their effects ripple out across the other dimensions and then ripple back in again as negative effects are reinforced. 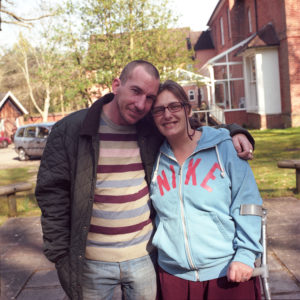 Photo of Thomas and Tammy Mayes, taken by Eva Sajovic as part of an exhibition called “The Roles We Play: Recognising Contributions of People in Poverty”.