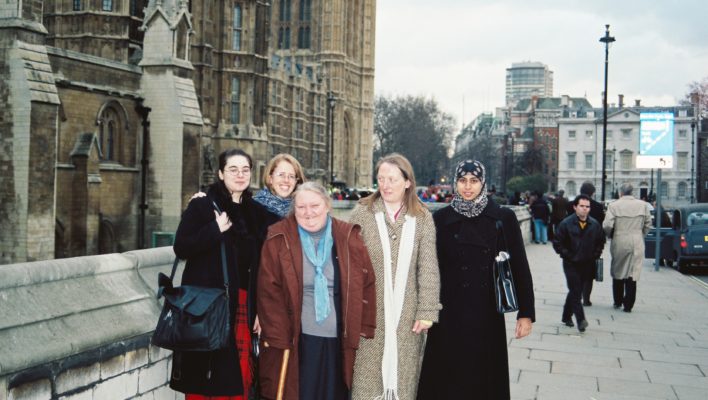 This tribute to Moraene Roberts (1953-2020) was written by Ruth Lister, Member of the House of Lords and Emeritus Professor of Social Policy, Loughborough University. In the above photo, Moraene is in the centre.

I can’t remember when I first met Moraene, but the more I got to know her — both through her writing and in person — the more I felt this was a truly remarkable woman. As both a human rights and poverty activist and as a person, she had a special quality. In part, I would sum it up as a steely gentleness: steely in that she never gave up fighting for what she believed in; but always gentle in the way she related to others. And her activism was informed by a deep wisdom.

It was through this wisdom Moraene taught me so much about what poverty means for those experiencing it. In the first edition of my book on poverty I quoted her twice from a National Poverty Hearing:

‘The worst blow of all is the contempt of your fellow citizens. I and many families live in that contempt.’

‘No-one asks our views … but we are the real experts of our own hopes and aspirations…. We can contribute if you are prepared to give up a little power to allow us to participate as partners in our own future, and in the future of our country.’

Working on the second edition, I came to understand something that she had been saying all along but that I hadn’t really heard, namely that people in poverty are all too often dehumanised:

‘We are neither recognised nor treated as human beings.’

This was a central theme of the address I gave at the launch of the ATD/University of Oxford research report, The Hidden Dimensions of Poverty, in Paris last May. I ended my address by reciting an anonymous poem from an earlier ATD creative writing project, Out of the Shadows. I have recited this a number of times at the end of a speech on poverty because it makes the demand to be seen as human so much more powerfully than I have ever been able to. It often brings me close to tears as I find it so moving. Afterwards Moraene told me that she was the author and she had been in tears as she had never heard someone recite it before. That was a wonderful moment for me. I can think of no better testament to the enormous contribution Moraene made to the anti-poverty movement than to finish with that poem:

Thank you Moraene and rest in peace.