Unity Is Strength with Poverty2Solutions 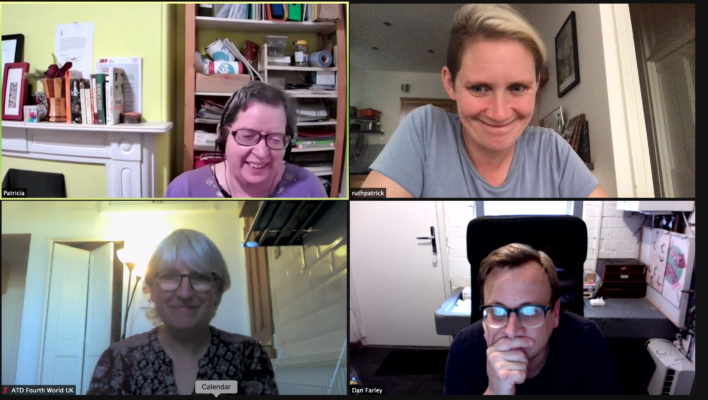 On the face of it, Patricia Bailey, Ruth Patrick and Dan Farley don’t have much in common. One works at a train station in London, the second lectures at the University of York, and the third is a graphic designer from Stockport. Five years ago, however, they came together, united by their passion for social justice and their desire to put people experiencing poverty at the heart of decisions affecting them.

Together with a handful of others, they embarked on a adventurous journey to create Poverty2Solutions, an unpretentious funded project aiming to design solutions to poverty. Never did they imagine that Poverty2Solutions would still be alive and kicking nearly half a decade later. In an interview with Patricia, Ruth and Dan looked back at how the journey began and where they are now. This article is based on that interview.

In 2016, Ruth says she “hadn’t long finished my PhD. I had been in a long-standing relation with Dole Animators and had been inspired by work done by ATD Fourth World and Thrive Teesside”. She approached these three groups and, together with Dan, they started sharing their ideas about how to solve poverty: Poverty2Solutions was born. Later, the Joseph Rowntree Foundation got involved and the coalition gained impetus. Ruth and Dan believe that different ingredients made the recipe for Poverty2Solutions successful.

First is their commonalities: they share the same vision and common ambition to create a fairer society. They believe that in many ways, the existing structure, “the government and different schemes don’t do what they are supposed to do—or they make things worse”. Not the least deterred by challenges, Poverty2Solutions is committed to trying and ultimately get rid of poverty and completely change the way institutions work.

Second is their diversity. Members are really different and bring different things. They don’t always agree, but their shared values motivate them to be open and straight with each other and overcome disagreements. Over time they have built a relationship of trust to the point where “it feels like three families coming together as an extended family sometimes, where people who may not have lived experience of poverty but have got similar values and have a specialism to offer are sort of cousins”. These relationships make them stronger.

Third is their drive, readiness and determination. Dan, Ruth, and all the activists involved invest their time in Poverty2Solutions because they are passionate about the cause and believe in what they are trying to do. That drive and determination always pushes them forward and often emboldens them to be more ambitious.

Fourth is their willingness to tap into each other’s expertise. They learnt that they have different skills and that they can achieve a lot when they draw on one another’s strengths.

Last but not least is their camaraderie and sense of humour. They have got to know one another’s idiosyncrasies, which helps appreciate the other, love their personality and know what will help each person feel most welcome. Having a laugh together while working hard definitely helped them get on with each other and overcome hurdles.

Of course, external and internal challenges remain, and the size of the task ahead is daunting. Poverty2Solutions is “trying to do really hard stuff and there’s lot of headaches and heads scratching of how to move forward all together, making sure everybody can input how they want to input”. Remaining barriers include the challenge for people with lived experience of poverty to make their voices heard in policy debates. The abrupt transition to virtual meetings due to the Covid-19 pandemic has also been difficult to negotiate. (See this article on the digital divide) But thanks to its common goal, diversity and energy, Poverty2Solutions is always up for a challenge and eager to forge ahead.

The current campaign of Poverty2Solutions aims to ensure that debt deductions from Universal Credit and legacy benefits are not drivers of hardship and destitution. Due to time constraints and other commitments, Ruth and Dan have now reduced their role. Ruth still helps in the background with facilitation and writing. She also acts as an advocate for the coalition. Dan remains a resource on the design front. Both are proud of what Poverty2Solutions has achieved. They learned a lot and this inspires them in other areas of their work.

An extract from the interview

Patricia: What is your hope or dream for Poverty2Solutions in the future?

Ruth: I think that it’s about success on the group’s own terms and I think one of the exciting things that challenges things is that that keeps shifting; that every time we’ve got a win we get more ambitious, which I think is fine and is good. I think from my point of view it would be good to see concrete changes in policy that happen as a result of involvement of Poverty2Solutions; that would be massive.

Dan: Yeah, it feels like the next step would be to have an example of where you work with a department or a local authority and a policy’s changed and you’re just about to go into your second or your third project with another decision maker or policy maker.

That would feel like we’ve gone from being from the outside to the inside.

Patricia: I agree on that, Dan, definitely. Anything else you would like to add?

Dan: It’s been a privilege, definitely, personally, as someone who works in a little room at the back of the house on my own. Poverty2Solutions has definitely closest thing I have got to an organisation and a set of colleagues, so that’s quite special.

Ruth: I think the same. Just like the ripple effect, I think we covered it a bit. Just the ways in which influence for all of us in different ways, makes it much more than a sum of its parts. Like the work of APLE and even thinking about JRF and how JRF have been really inspired by what we have done and that is influencing what they do in other areas. Dan’s work using visuals and how people have found that really beneficial and they use that in their work in different ways. Yes, it’s exciting.