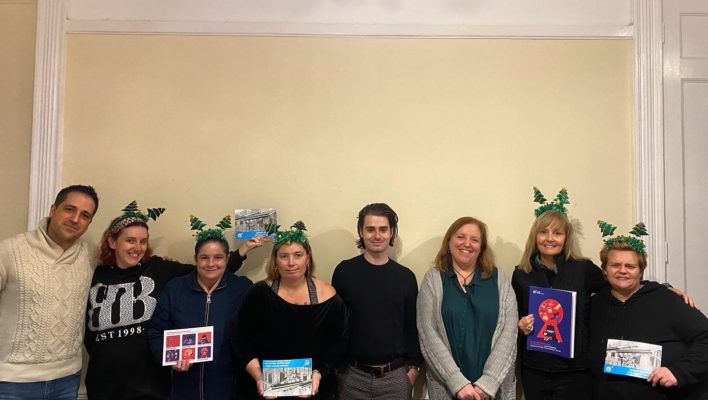 Above: In December, members of BEAM from East Anglia visited ATD’s centre in London to contribute to this submission to the United Nations.

We are proud to share ATD Fourth World’s submission to the United Nations Committee on Economic, Social and Cultural Rights (CESCR). It was written in collaboration with Human Rights Local, a project of the Human Rights Centre of the University of Essex, who firmly believe in the power of making human rights locally relevant.

The CESCR committee is the body of 18 independent experts that monitors implementation of the International Covenant on Economic, Social and Cultural Rights by governments who have ratified it, including the UK Government.

The Covenant promises the rights to: non-discrimination; just and favourable conditions at work; special protection and help to the family; an adequate standard of living, including housing; education; health; social security; among other rights. Every five years, the CESCR committee engages in meaningful debate with the UK Government to ascertain if the Covenant’s standards are being upheld, to ensure that people have access to their rights.

Since May 2022, ATD and Human Rights Local have undertaken extensive research, led by people with lived experience of poverty and the social care system, alongside practitioners such as social workers.

This contribution seeks to bring to the attention of the CESCR that families in poverty in the UK can be subjected by children’s social care to harsh interventions that are discriminatory and driven by a concept of risk-aversion that is inconsistent and fails to fully consider the harm done by removing children into State care or contested closed adoptions.

Questions for the government

Eight questions about the right to protection and assistance to the family were posed in the submission. A few excerpts are listed below, and the full report can be downloaded here.

What measures does the UK Government take to prevent povertyism from skewing children’s social care  interventions towards harsh investigations that disproportionately affect families in poverty and deprived areas?

Povertyism has severe consequences for families dealing with children’s social care. Families in poverty go through painful separations more often than other families, with poverty becoming the wallpaper of practice for social workers “being too big to tackle and too familiar to notice.”*

“It’s true that some parents don’t have the skills needed to raise children. No one ever took the time to teach them how to cook or clean or budget. And these parents haven’t realised that they deserve support. Recently I was supporting a mother  with a learning disability whose child is in foster care. During a Zoom conversation, I taught her how to make soup that she  could bring to her child during a contact visit. The social worker told me that I was ‘interfering with the case’ because they  were already planning for the child’s adoption and wanted to show that this mother was not capable of raising her child.  Later when the social worker made an unannounced visit to the mother’s home, when she found it properly cleaned, she  guessed that I had again been supporting the mother, so she had a go at me for ‘interfering’.

“It’s only because they’re setting  parents up to fail that wrapping a community of care around a parent is seen as controversial.”

Why are contested closed adoptions so common in the UK when kinship care could protect children’s well-being  without permanently severing their ties with their entire extended families and communities?

According to Prospect Magazine, “The UK is unusual, compared to the rest of Europe, for the frequency of forced  adoptions. Exact statistics are difficult to pin down, but data from 2014 suggests that almost half of the 5,050  children adopted in the previous year were given new homes without their parents’ consent. In England alone,  80,000 children were removed from their parents in the year up to March 2021. Of those, 4,600 had a ‘placement  order granted’ for their removal. The context behind the removal of the remaining 76,000, is less clear.”

What measures are being taken to ensure that accommodation for 16 to18-year-olds is appropriate?

Sir James Munby, the retired president of the Family Division of the High Court of England and Wales, is of the view that the new regulation for supported accommodation will not help:

“There is the scarcity of suitable housing accommodation available for young people in care […]. In relation to this, we need look no further than the judgment of His Honour Judge Dancey […] [2019]

“a shocking case accurately  epitomised by a journalist as the grim story of a child passed around the local authority care system like a bag of potatoes, ending up in a caravan park.

“I need not repeat the distressing details of a truly terrible case. What I should set out, however, are the considered conclusions of this very experienced judge: ‘It is my experience in Dorset that the number of vulnerable  young people who need to be looked after or otherwise supported by the local authority is increasing. There are growing  concerns around child sexual exploitation, County Lines** and other forms of criminal exploitation as risks for these young  people’ Only someone with a heart of stone could read Judge Dancey’s judgment without wanting to weep or to rage.”

“I was informally fostered by a ‘trusted adult’ – a young community professional who, in earnest, thought they could help. I  waited patiently for the spare room to be set up, but as autumn turned to winter, I was still sleeping on a sofa bed in the  freezing cold living room. I now realise this was a sign they were wildly out of their depth, perhaps unsure they could commit to caring for a traumatised 16-year-old. One day after school, I found a note on the kitchen table. It said I had four days to  find somewhere else to live – a particularly cruel deadline, given it was 20 December. I never really got over this. This  rejection, at such a pivotal point in life, damaged my ability to form trusting relationships for years.

“I ended up in an  unregulated hostel among adults known to police. The first thing any resident ever said to me was, ‘If you want any green  [drugs] you know where I am. I remember listening out to see who was in the corridor before I could gather up the courage  to leave because some of the other residents there were adults, some vulnerable themselves, some having just gotten out of  prison.”

The research for this submission was based of a series of study groups, and led by Angela Babb, Patricia Bailey, Amanda Button, Taliah Drayak, Anna Gupta, Simon Haworth, Gwennaelle Horlait, Tammy Mayes, Yuval Saar-Heiman, and Diana Skelton. The contribution to this submission was funded by ATD and by the ESRC Impact Acceleration Account and by the Centre for Public and Policy Engagement of the University of Essex. The project lead was Dr Koldo Casla and the Research Officer Lyle Barker.

In addition to writing this submission, ATD has contributed to two group submissions, one by GRIPP (the Growing Rights Instead of Poverty Partnership), that can be downloaded here, and one by the End Child Poverty Coalition that you can see an article about here.

**’County lines’ is a policing term used to describe the distribution of illegal drugs, which sometimes includes the criminal exploitation of children.