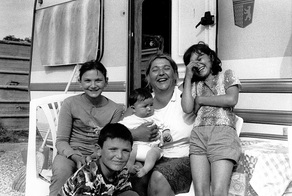 Those are never words you want to hear—even less so when you’ve walked into an office hoping to get help with an administrative problem. When people live in poverty, they’re so often made to feel unwelcome. It may be because of the way they speak, or their clothes. Or it may simply be because, in a world where so many people feel busy and tired, energy runs out for offering a word of welcome.

In Ireland though it is no ordinary welcome that is offered to guests. In the Irish language, the phrase “c’ead mile failte” means “a hundred thousand welcomes.” The words are particularly meaningful spoken in a country that has seen so many of its citizens emigrate over the years. In the 1840s, it was the famine that pushed millions to emigrate. This fate was sometimes forced on people, as is remembered in the song, “The Fields of Athenry,” about a man who stole bread to feed his family and was punished by being exiled to Australia. Irish emigration continues today, with almost 250 people a day leaving the country throughout 2013—one of the highest emigration rates in the world, higher than that of Haiti, the Sudan or Guatemala. The Independent newspaper voices the country’s regret that economic difficulties mean “youngsters are forced to leave their families and friends behind” as well as “a brain drain of talent.” What does it mean for any country to see so many of its strongest and most capable young people leave, year after year? Too often, they are exploited, or even subject to abuse as newcomers, far from home, coping in unfamiliar languages and contexts.

This was what happened to Irish people who emigrated to England, where they were often made to feel unwelcome because of the conflict between their countries. This experience makes their hundred thousand welcomes even more heartfelt when they are shared with all those who arrive in a new place, and all those who manage to return home after long journeys.

It is just the same with ATD Fourth World: many of us have been treated rudely and shown that we weren’t wanted. But ATD Fourth World is where everyone is treated as equals. Treating all human beings with dignity also means that it is never just one person who welcomes another. Each of us has something to share with one another, be it only a smile or a warm word. Maybe what we can learn from Ireland is that the true meaning of a hundred thousand welcomes comes to life when all people, with all of our differences, learn to reach out to welcome one another.