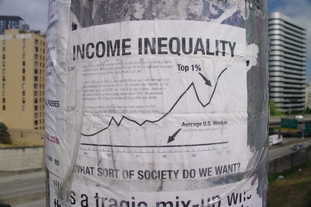 So how would I tackle it? Firstly, I would want to recognise the value of the human being, rather than their socio-economic status. We all have inherent value, and our biological traits dictate that value, not our parents’ wallets.

A particular scheme I came up with requires a billionaire philanthropist or two. Or of course, a movement that those people want to get behind and put their well-known names to. Currently we have huge businesses and wealth being passed from family member to family member. This means that the recipient hasn’t really earned any of the wealth being granted by parents, and those recipients have not had to compete to earn their status.

What I would do, were I a successful billionaire with a massive business empire, is grab as many people as I can from the ‘lowest’ echelons of society. I would seek out the people who have little or nothing, and I would show them how I became insanely wealthy. I would teach every single one everything I know about getting rich, and about my own strategies and tactics. This may seem redundant in today’s world, because they’d never have a shot at it, but that’s where my own wealth would come into it. I would provide generously for their own upstarts, guiding their development, and funding their own ideas. At the end of the scheme, I would ask them to come up with some form of innovation to tackle social issues, and every participant would win something big. However, the very best among them would become my own heir, gaining my business and wealth.

See, I don’t think inequality can be solved through a forceful approach by government, but simply by sharing. The scheme above would affect thousands more than just the folks I took under my corporate wing, because of the ideas that they themselves finally got the chance to put out there. However, it begins by not taking people as a ‘number’. It begins by seeing that everybody contributes in some way, and everybody has something to offer.

By casting aside the delusion of there being ‘worthy’ people and ‘little people’, as opposites, and instead embracing the reality that many of the poorest are in fact much harder workers than the CEOs of the world. Also, they’re often smarter. There are many examples of people from humble backgrounds breaking through… how many are there who never get the opportunity to do so? Michael Faraday, a bookshop assistant from a poor background became one of the best-known chemists in history. William Herschel, who had no education in astronomy, made his own telescopes and discovered Uranus.
The base of what I’m getting at is that everybody has worth, as a human being. Everybody has a role to play in society. it makes sense that from this basis of near-equality, we should find a way to directly translate that into opportunity for wealth and prosperity, rather than keeping people poor, just because they happen to already be poor. By putting opportunities for growth into the hands of those without, we can only go forwards and grow.

Seems like the benefit system perpetuates inequality, by breeding contempt for claimants, because they’re perceived as being a drain on resources.
​
Paul, Thinker

Our friends @ATDFourthWorld say they want to build a "human rights bridge" out of poverty - some exciting events coming up:
https://atd-uk.org/2020/10/16/building-a-human-rights-bridge-out-of-poverty

Thank you to @MarcusRashford child poverty is being debated in Parliament. Good to hear @GavinWilliamson say social security best way to support families. We need it all. FSM now and a long term plan to #endchildpoverty with investment in social security

@trustforlondon @ATDFourthWorld @4in10 Put very articulately by Patricia. When with is so poorly paid, its not empowering but a further source of stress and worry exacerbating the effects of poverty