‘Soul Restoring’: the Values of the ATD Fourth World Community 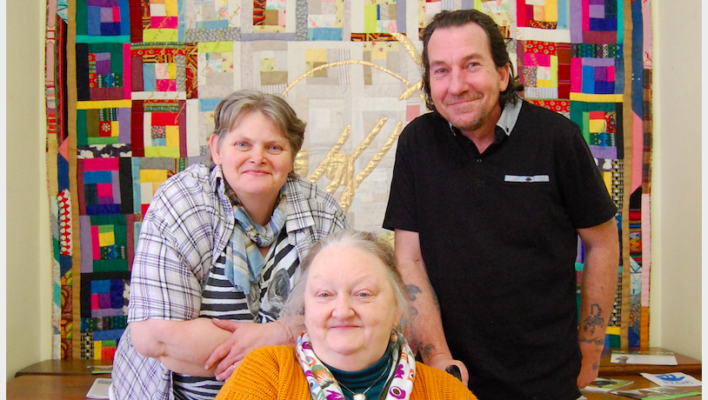 When choosing our new National Coordination Team in March 2019, three of the people who helped lead that process spoke about how their lived experience of poverty has forged their roles as activists, what they value about ATD Fourth World’s approach, and what they see as key steps forward. Excerpts from their comments follow.

Amanda Button: As activists, we’re proud of the ethos that ATD Fourth World has had until now. “The Roles We Play” was a strong project because it gave each person a sense of pride. It gave us ownership and control over our own portrayal. It has also been a tool for opening doors at universities and other organisations where we can meet people who have goals in common with ours. During skill-sharing weekends, people with different levels of strength can help one another. We’re complementary.

For myself, and for two or three of us I know, poverty is about what life throws at you. There are so many other places where you go to ask for help, but you feel ashamed. You know people are judging you. As a young mother, I was convinced that there was something fundamentally wrong with me. I am normal, but the other agencies I went to for help made me believe that I wasn’t.

You hit rock bottom, where you feel there’s no point in getting up in the morning. You might as well be six feet under.

At ATD Fourth World, I met others who were in the same situation as I was. Here, I don’t feel like people talk to me only because they’re paid to. People are all treated as equals. It’s not “them” and “us”. People are welcomed for themselves. It made me realise that we’re all perfectly normal human beings. It’s the situation we were in that was so abnormal that it stripped our humanity away.

When we come together with others, you feel honoured in your soul. People have their soul destroyed, but then ATD Fourth World helps them to rebuild it. Here at ATD Fourth World, I got to know people who could help me. It’s our saving grace. We would have gone under.

Within just a month or two of meeting ATD Fourth World, I knew I could be involved here long term. I knew that if I screwed up along the way, I could come back and start again. The ATD Fourth World centre in London is more than a building; it’s where we feed our souls.

ATD Fourth World core workers believe that we try our best. Here, I was asked to help send out mailings. That gave me a sense of purpose. And I meet people of so many different cultures and levels of education — that opens things up, getting to know different people.

Moraene Roberts: When you’ve been dismissed and put down for years, it’s really something when you occasionally throw something out there and one of the core workers here says, “Wait, let me grab a note pad; say it again, because that’s important.” Who the hell says that? Here, you’re not becoming dependent, asking for help. ATD Fourth World is prepared to listen and learn from people who’ve been kept out of social movements, and it brings that knowledge out to teach others. Here, I don’t just receive. I give back something of value.

The first step, before becoming an activist, is recognising yourself as part of a community in poverty, part of the ATD Fourth World community. When I first came here, I didn’t think of myself as being “in poverty”. But here, I met lots of other people who were going through the same situations I was. We had things in common. That made me think that certain aspects of my situation were my own responsibility because of choices I’d made, while other aspects came from what had been imposed on me. I began to recognise the fact that poverty is created. Before, I thought that poverty was normal because so much was completely out of my control.

These realisations made me feel that we have to really fight and to decide what we want to build in place of poverty. For ourselves, we’re often so battered down by the situation that we accept it. But when you see others suffering, you feel indignant about what’s been done to them. You begin looking for people to support. It really was a fight; it felt like a struggle for years and years. More than a fight, it was a rage: how dare they impose this on us, and then blame us for it? Eventually you can get over the rage — but you can’t do that alone. Realising that you’re with others gives you courage.

ATD Fourth World’s strengths are the solidarity among all of us and the legacy we inherited. It’s our duty to continue and to develop this legacy, and also to develop our personal confidence and autonomy. We also see opportunities in the wider network with other organisations where activists are now involved outside of ATD Fourth World. We’re a “family of choice” because we work and think together. It’s not top-down.

Thomas Mayes: An important value at ATD Fourth World is that we’re all-inclusive. We listen to all voices, and we give activists the opportunity to use their voices. It’s not like charities where the people in charge do all the public speaking. We also like the level of trust here. You can tell the truth.

Now, to keep what’s special and also carry on, we need to find new people, and we also need to find a way of safely integrating them. Some activists find it hard, when you’ve had a project for a while, to work with new people who might want change. But after a project has been running for several years, you need a new outside look at it to see what needs changing.

We give each other little nudges here and there. And that turns into training. It can help you learn how to talk in front of someone hostile who doesn’t agree with you. That training is a crucial aspect of freeing people from poverty. Whether we have personal experience of living in poverty or not, all members of ATD Fourth World have things to learn. So cooperative training and skill-sharing with one another needs to be a bigger part of our work.

Moraene Roberts: Another important part about ATD Fourth World is that we really get to know people from different backgrounds and levels of education. I was brought up to believe that the rich just don’t care; but here I’ve met some seriously wealthy people who do care about ending poverty. Our struggle is not a class struggle; it’s a struggle for human rights. As activists, we don’t want to speak only about what it’s like to be in poverty, but about what causes poverty, about possible solutions, and about the benefits to everyone of creating a poverty-free society.