‘Let Me Tell You About Social Discrimination’ 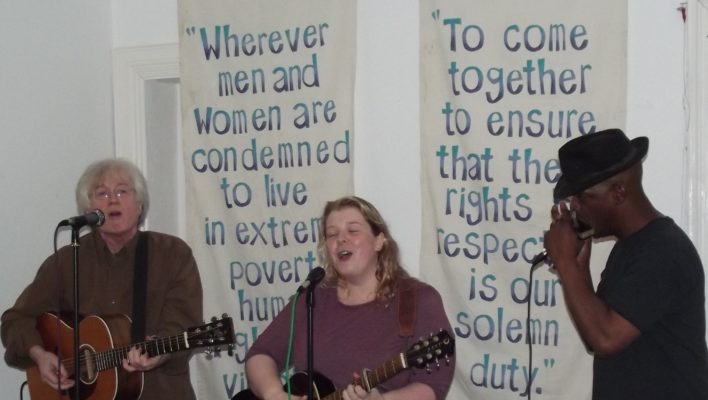 To mark the World Day for Overcoming Poverty in London on 17 October 2018, one woman gave this speech:

Recent prejudice and discrimination is around my daughter who is 15 years old. She has mental health issues. She self harms and keeps taking overdoses of paracetamol. She has overdosed on paracetamol 7 times in the last year. The hospital have a policy that they report to social services. So we were constantly referred. This year the social services threatened to take us to courtbecause they thought I had an illness and that I was making things up. Now the hospital has admitted that I am not making things up and a psychologist has proven that I don’t have any illness. This is all because we keep fighting to get my daughter the help she needs. We’re still fighting 3½ years on.

The professionals are so prejudiced. One of the things that came up was that we used a food bank! Apparently we should not use one because that means we cannot provide for the kids and they should go on the “At Risk Register”. It annoys me because they frown on us for using food banks and they say we can’t budget etc. But as anyone who knows will tell you, if you live in poverty you have to budget because you would not be able to live otherwise.

Secondly, the house is not decorated properly enough for social services and they tell us we need to redecorate everywhere, despite it only being done 2½ years ago. They look down on us all the time. They don’t listen to us or take the medical evidence we provide. They will only accept evidence if a professional tells them it directly despite us having letters.

I would also like to share with you what our neighbour thinks about social discrimination. She is a young woman living on her own and also bravely battling to get support for her mental health issues. She says:

Let me tell you this. We don’t like to be depending on other people, but there is not enough help or resources out there. When we ask, not everyone helps. I think in general once you leave school or college there is no-one really telling you what you can do to change your future to actually benefit you.

This year I wanted to carry on a cooking course that I did before. My mental health worker organised it for me. It got me out of the house and socialising with people as well as helping me get into cooking. But due to a lack of funding, I was told that I would have to pay for it myself all in one go. I could not afford to pay. There wasn’t an option to split it to make it easier to pay.

It felt like if you have the money you can go ahead and carry on learning. Whereas for people like me, we can’t do the course or otherwise you cannot afford to do stuff like eat, keep warm. So why should we be treated differently? It makes me feel that myself and others do not get granted the same opportunities. Because without learning how can we contribute to the world?

At the same event, two other women, Jennifer and Sue, spoke together about challenges in their community and also about going on in spite of it all:

We live on an estate in Camberwell.  It’s a multicultural place where people from all walks of life and people with various different skills, live alongside each other.  It’s a place of mutual aid too. Many people are doing things for others in their community,  some poorer than themselves, without realising the impact of what they do.

Many factors in society make us feel vulnerable and worth less than others. People judge us according to our postcode, where we went to school, what we do in life. When you go to a bank in Central London they take good care of you and try their best to help. But when you go to your local branch, people look down on you. The same goes for the job centres. One of our friends went to a job centre uptown and they were very nice to her, but in a poorer area they are not so helpful. They don’t understand your needs and they don’t listen to you.  They don’t try to understand where you are coming from. They make you lose hope.  They make things harder. We are meant to be kept down.  They gave another friend two appointments far away from each other at almost the same time. It was physically impossible for him to make it to both appointments. It’s threat after threat, and stress after stress.

Even when people have the best intentions, they judge us unfavourably. South London Gallery decided to open a door on the estate for us, for “local people”.  That was a great idea, also because they wanted parents from the estate as advocates at the opening. But one of the ladies from the gallery said:  “Obviously, I don’t know what it is live to live in a council estate because I live in a residential area.” She was trying to reach out to us, but we still felt she was looking down on us.

The government introduced a dreadful scheme, called the Universal Credit. It started as a trial and so they didn’t understand fully how it would work.  Of course pilot schemes are always run in the poorest areas. It was a moment of panic and terror for us  when it started. I cried because I saw what it was doing to people around me. When you live with someone as a couple and both receive Universal Credit, you get one monthly joint payment paid into a single bank account. “If you are married, your husband can provide for you,” they told me. Fair enough. But what if a woman is abused by her husband?  They have no regard \ for the individual. If you make a mistake, say you tick the wrong box when you fill out your claim for Universal Credit or you don’t read an email the job centre sends you,  it can have devastating consequences. Take Mr N. for example. Three times, he filled out the application form wrong, so they cut him off.  He had to appeal.  Even though they were in the wrong, he had to wait for six weeks before he received the money. It’s a complicated process that takes time.

Errors happen easily because everything is computerised and the information is complicated. They assume you have all the tools needed. They assume you have access to a computer with the internet and you are penalised if you miss something. You are told to use libraries, but I can’t use the Universal Credit Website, which is very hard to navigate and to understand. Moreover, sessions in libraries are for one or two hours only. Sometimes you lose everything when the connection stops and you have to start all over again the next time. They expect you to have the latest smartphone to read your emails, but it’s not something you can afford if you’re poor. They say: “There was free training available, it was advertised, how could you miss it?” They don’t help us to have access to that information. The information doesn’t reach those who need it. The Universal Credit has had appalling consequences and provoked demonstrations.

We want something better for our children. We are adults and we are strong; we can withstand a lot of things. We want to protect them from what we had to endure. We don’t want their confidence to get knocked down. But we can see that the cycle of violence is perpetuated on the younger generation. Other children look at their shoes or their clothes and judge them. They call them all kinds of names. My kids get upset when others say they’re poor.

Once, when I felt at a low point, I asked a man who is hard on luck how he manages. He just got on with it, he told me. That gave me a lot of strength. All of us just have to keep going, no matter what.

It’s time for society to change how it values people.  Acts of selfless support should earn more recognition. I bear witness to the many examples that I see around me of people in need who give a lot to the worst off in an attempt to make our community a better place. 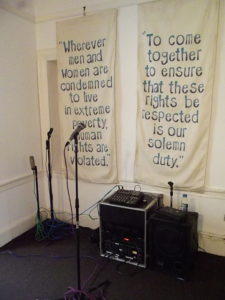