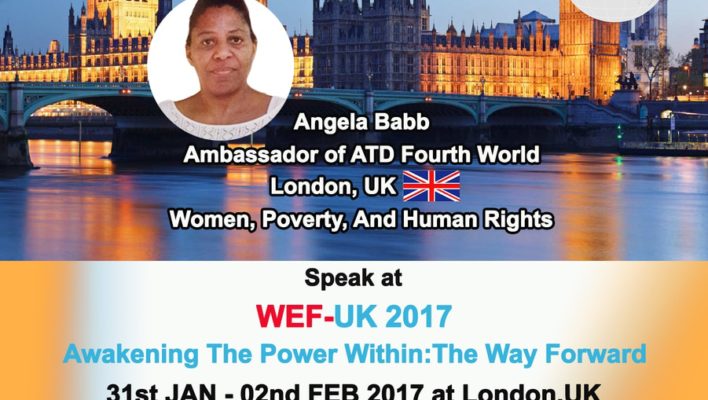 In March 2018, Angela Babb spoke on behalf of ATD Fourth World at the Women Economic Forum in the Hague (Netherlands):

I am Angela, a mum of seven kids and I live in east London.

What do I think when I hear the word ‘inequality’? I think about not having enough food to eat. And I think about not having enough food because there is no job. Having no job means you can’t make ends meet because there is not enough money to live on. It means getting by and living day-to-day. In other words, the word ‘inequality’ makes me think about the system. Children and their families get trapped in poverty, and that’s the fault of the system.

I want to work; but left school without the qualifications I need. And who will employ me without qualifications? I try to change this. I have done courses at a local community centre to try and get qualifications so that I can get work. So to get equal access to jobs, what people need is more support to make that next step. But even before looking for a job, why do some young people leave school without qualifications? Going to school is important. Kids need to get a good education because it will help them find a job when they are older. If they can find a job then they can earn money, pay their own bills and become independent.

But not all children have equal chances of succeeding in school. In London, for example, students are supposed to have zipcards to pay for their transportation to school. But two and a half years ago, my daughters had no zipcards. This meant that they could be thrown off the bus. That made them late for school, and sometimes it made them miss school altogether. The school complained about their poor attendance .It’s fair to say that it was disrupting their education. They were missing out. And when you’re late, I think the whole class gets disrupted. But I don’t remember the school ever asking if they could help. I realised that we needed a plan to get their zipcards sorted out but it was not easy.  Firstly, you have to apply online but I had no computer at home and no way to get online. I had to ask for help. Second, you also need an email address to apply for zipcards. But I didn’t have one because I don’t have a computer. So we had to create an email account for me. Third, to apply for a zipcard, I needed the girls’ birth certificate and passport-sized photos too. We had lost the birth certificates a long time ago so we had to order them replaced and that cost money. And we didn’t have any passport-sized photos so we had to buy them as well. So please do not tell me that education is free. Just to finally get my daughters the zipcards they needed to travel to school, I had to spend a lot of money at a time when we had trouble paying the rent on our flat. That’s an example of one kind of inequality: unequal access to a resource that is supposed to be for everyone.

Another example of inequality is about blame. When you live in poverty, you always get blamed for your situation and told that it is your fault that your children are growing up in poverty. When society says that child poverty is caused by bad parents, I feel society is trying to blame me for my situation. The system traps us and then blames us for being trapped. But society should be supporting us instead. Is it all my fault that I left school without the qualifications I need? Or is some of it the fault of the system too?

The support that families get is unequal too. When the failings of the system are blamed on parents, all that does is undermine the family unit. You can see your child struggling year after year, but not actually receive a diagnosis of autism until he turns 17.  And if you are struggling to help your children, sometimes the only response from social services is to remove the children from your custody. If that happens, it might be many years before you can see your own children again, and before they’re allowed to see their brothers and sisters. By then, there’s been so much strain and stress that you have to get to know them all over again. A good parent can live in poverty and offer their child all the love they can give. A bad parent can have all the money in the world and never give their child the attention they need. I may live in poverty but I still fight for my kids and for what they need. My children have seen me struggle and I want a better future for them. More than anything, I want them to have a good education and to be able to go to college or university. I want them to be happy in anything they choose to do. I want them to make the most of the opportunities that I never had.

My mum was born in Venezuela but moved to London as a little girl. She worked in a school as a dinner lady who cooked and served meals. She also worked in the city cleaning office buildings. We mums have to be strong for our kids. We always focus on our kids; we put ourselves last. If we’re not strong for them, how can they ever overcome inequality?

Political participation for women like me can be hard because of poverty. People in poverty are made to feel bad about themselves and also have their time filled with challenges. Some people think that if you are on benefits you must be a work-shy scrounger. People think ‘oh look at her, why can’t she get a job, why can’t she do better?’ Why do people on benefits get so stigmatised? When you feel humiliated, it becomes even harder to stand up in public and participate in politics.

Participation can also be hard because of all the energy you need to protect your family. In the papers, you never read a good story about our neighbourhood. The news is always about a teenager who got stabbed, or about guns, or shootings. You know, young people get bored in our neighbourhood. Half the community centres are closed, and there are no jobs for them. There is nothing for them to do. So some kids think the only way forward is the path of destruction. For mothers raising children in a low-income area, all these day-to-day challenges make it very hard for us to participate in politics.

It is important to have a public voice. I wouldn’t have been able to make a speech like this a couple of years ago. I wasn’t confident enough to stand up and speak in front of a crowd. But being respected has given me the confidence to speak out in front of people and in public. In 2014, I spoke at the Houses of Parliament. Speaking out is my chance to explain what life is like for me and for other people. We need to make sure that all women can meet people who respect them. This can give more of us a chance to begin speaking out.