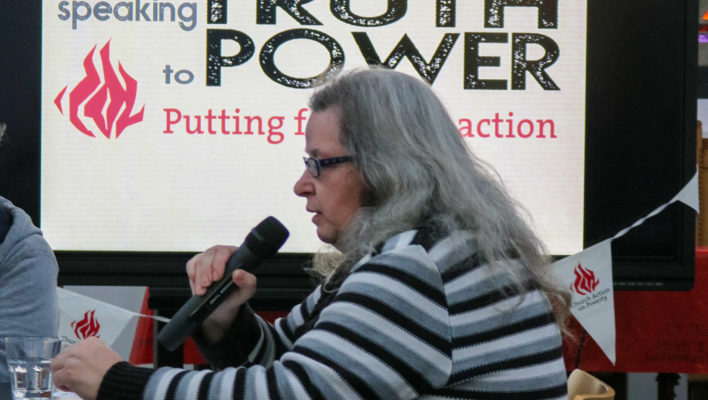 On 20 November 2019, Patricia Bailey was invited to represent ATD Fourth World’s #PovertyExperts at a ‘Speaking Truth to Power’ fireside chat at the South East regional gathering of Church Action on Poverty. Patricia has been an activist with ATD Fourth World for 18 years. She has also been a media activist for On Road Media for the last two years.

Based on your own experience, what would you say is the most important ‘truth’ that you want to share with others?

Be truthful. It’s a case of being yourself, and saying something when it’s important to speak up. People in power are not being honest with us; we need to know what’s going on. They’re making things worse for us with the cutbacks.

How important is it for you to have the opportunity to speak out about these issues?

ATD Fourth World have supported me and my daughters through a difficult time. Working with them keeps me busy. I need to give something back. ATD has given me lots of opportunities to speak about my experiences — it’s a good opportunity to speak about what’s really happening in the real world.

At first, years ago I was quite nervous about speaking publicly — public speaking is something I never thought I’d get to do….

When I speak, I think, “Are people listening?” It’s not until the end, when people say “Well done”, I realise that people were listening to what I had to say. That’s important — a lot of people aren’t listened to. It’s nice to be in a situation where you can speak and get feedback.

I feel proud about speaking my ‘truth’. Not everyone feels comfortable speaking in public. The few of us at ATD Fourth World who have done, we feel proud of what we’ve done.

Is it important for you for politicians or other people in positions of power to hear your ‘truth’?

Yes — they may not like it but they’ve got to hear it. A few months ago, Poverty2Solutions went to Portcullis House to meet Harriet Harman MP in her office. We spoke about everyone’s lived experience of being on a low income. We felt heard. I’ve always felt heard by Harriet Harman. Some MPs don’t want to listen to what we have to say, but she wasn’t rushing away to another meeting; she heard us.

If the person you’re seeing wants to be respected, then they’ve got to respect us. They’ve got to respect us — we’ve got to work together. Without respect and dignity you might as well forget it. It makes a big difference when someone sits and listens to you. I don’t like being rushed. Although I might rush other people myself! 🙂

When Harriet Harman was my local MP in Camberwell and Peckham, she helped me out years ago. I was having problems with paying my gas — I was struggling because Social Security and British Gas were taking too much out for the bills. She had a local surgery and I went to her, and she managed to write to them and say to them “What you’re taking is too much.” I needed to make sure my three girls were supported. It made a lot of difference to get her help.

When we met Harriet Harman this year, it was Pancake Day, and she gave us some pancakes! She was nice and welcoming.

To be able to speak my truth means telling people in power how it is. The Government doesn’t know the reality of what people feel. Me and you have to live day in and day out with benefit cutbacks. Making ends meet is a struggle. They’re in their glass houses; they don’t care. It gets on my nerves. The Government is disconnected from people’s real lives, whether you’re in poverty or not. They want to cut everything, but they have everything — they can retire easily, can give themselves pay rises, private health insurance. We rely on the NHS and they want to cut that. Never mind Brexit! It’s annoying.

Do you think anyone is listening?

Yes, I have two examples. With ATD Fourth World, we do social worker training. The social workers we have spoken to want to find a different way of dealing with families. We tell them: instead of reading a file, and judging what the family is like, meet them and then make a decision. In my experience, social workers can label people as ‘trouble’ without knowing them. And what annoys me and others I know is social workers who tell me how to raise my kids, when they haven’t got kids themselves!

In the training, they really listen. I know they’re taking what we say on board by the questions they ask. One time — I laugh when I think about it — a social worker said ‘Poverty isn’t in the UK’. We had to laugh. But we explained that here you are dealing with families who are in horrible positions on low incomes. After we spoke with her, she understood that poverty does exist in the UK! Poverty is not the families’ fault though. It’s the system and it’s structural.

My second example is with On Road Media. We meet journalists behind the scenes and we’ve met with Cosmopolitan and Newsnight, which I found really interesting. With Cosmo, we were all nervous. You could tell by the look on their faces that the journalists were wondering what we’re going to ask. I think we left as friends. We got to share our Roles We Play project and book. That’s a project I’ve been involved in for some time. It shows that, even though we’re locked in poverty, we have something to contribute to society and community. It’s good to show what we’ve been doing. I think they liked the photos in the book, even mine. 🙂

I feel listened to when I meet journalists now. I did an interview with Channel 4 News and Jackie Long about Universal Credit. She made me feel really comfortable. I didn’t feel rushed. Once when I met a journalist, it was a nightmare. She had lots of questions and she was digging. I didn’t like it all because she was rushing me.

When we meet with journalists through On Road Media, it is relaxed. I shouldn’t feel rushed to answer questions. As I get older, I just want to slow down… 🙂

What would be the one thing that you would have to say to anyone listening in on our conversation today?

Take notice of what everyone’s saying. We want change. I hope change is possible. It would be nice for the Government to listen to what we have to say instead of going by what they want. We’re the ones that have to live it, day in day out, the struggles…

What advice would you give to someone wanting to speak publicly about these issues and speak their ‘truth’?

Hold your head up high, be proud of what you have achieved. People may feel they haven’t achieved anything, but when you sit down with them and talk it through, like with me, now I feel like I have achieved a lot. I feel valued. Speaking out is something I wanted to do and I’m glad I did it. I realise now I’ve achieved a lot over all the 18 years I’ve been at ATD Fourth World!

Solidarity is important: everyone working together to achieve a better life. It might take time, but it will happen.

With thanks to Alana Avery of On Road Media and to Niall Cooper of Church Action on Poverty for supporting this event.