Panel Discussion with the National Union of Journalists: Reporting on Poverty 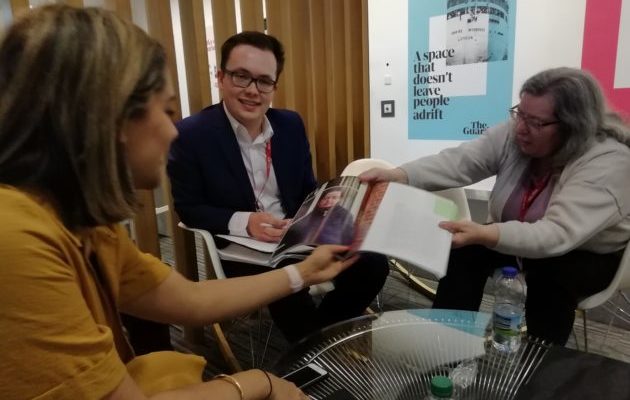 (Above: Patricia Bailey, at right, meets with Sonia Sodha, a Guardian columnist, as part of an On Road Media project.)

On 7 March 2020, ATD Fourth World UK was invited by the Joseph Rowntree Foundation to address the National Union of Journalists in a panel discussion about reporting on poverty. Another speaker on the panel, Gavin Aitchison of Church Action on Poverty, wrote about the event here. Below is ATD Fourth World’s presentation.

Amanda Button: I believe that the media and journalists can blow things out of proportion. They should take the time to get to know the people properly. They can often portray an image of them that isn’t true. The media don’t have the right to criticise someone who isn’t as well off or as well educated as them. They may not have had the same struggles in life. The media and journalists should be ashamed of themselves when they create false and negative pictures or images of the lives of people in poverty. People in poverty don’t ask to be there, they do the best with what they’ve got. People in poverty are often treated without dignity and respect, which to me is disgraceful. They deserve the right to be treated equally with dignity and respect. After all, they are human beings just the same as anybody else.

Patricia Bailey: Once, the three of us met a journalist who had no idea how her questions were coming across. She said she wanted to know what I thought, but she kept poking and poking. She dug in without really listening.

She wanted me to talk at her pace instead of at my own. So, I wasn’t comfortable talking to her at all. She had prepared her questions in advance—but she didn’t show them to me beforehand and I was just expected to wing it without any time to prepare.

Also, when she began, we thought we would have a long time to talk. But then suddenly she just looked at her watch and said, “I won’t take any more of your time.” And she left. It seemed like she had decided in advance how long to talk to us—but she didn’t tell us what her schedule was.

Diana Skelton: Sometimes a journalist makes an assumption that ends up derailing an interview. Once, at a big conference at the United Nations, I was with a woman who lives in poverty. A BBC journalist decided to sit down with her. But the first thing out of his mouth was: “You don’t look poor. Why aren’t there poor people at this conference about poverty.” Maybe he thought that a provocative question would spark a lively response. But the woman had actually gone to a lot of trouble to borrow clothing that she could feel proud of when walking into the United Nations.

And once the journalist made that comment about her clothes, she felt so uncomfortable that she decided to end the interview right there. It was heartbreaking because I know that the journalist did actually want to hear what she had to say—but he didn’t realise how his words would make her feel.

Another situation that went wrong took place in West Africa. A journalist wanted to interview children living in the street in Ouagadougou. So he invited them to a meal in a restaurant and interviewed them over dinner. The problem is that the children had no preparation and they didn’t realise that they could have refused to answer certain questions. There was such a huge power differential between the children and the journalist: their age, their poverty, and also their nationality because the journalist was visiting from France. The children felt that they had to give detailed answers in order to be polite and to deserve the meal they were being offered. And a few of the children regretted so deeply things that they disclosed to the journalist about their parents that after the interview they decided never again to visit their home village because they felt they had brought shame on their families.

Now we do have some positive things to tell you as well.

Amanda: A few years ago, Patricia, I and others from ATD who have lived experience of poverty designed a project called The Roles We Play: Recognising the Contributions of People in Poverty. This project gives people a chance to see another side to us. It brings poverty to the public eye in a new way and it brings it to the forefront of people’s minds. The project is an interactive photo exhibition, a book, and a film.

As part of the project, all of us had some photos taken. During the photo shoots, we had the opportunity to decide where, when and how our photos would be taken. We also had the choice of picking the final photographs.

Having ownership over my own image was empowering. It gave me a sense of purpose and control. I liked the process quite a lot because it made me feel like I was in control of how I wanted myself to be portrayed. Doing the pictures in the way that I wanted to do them meant that I can say ‘this is me’.

No one was tampering with my image. This is very rare in life, especially when you are struggling.

You need somebody who takes the time to listen to what you have to say and takes on board your views and your feelings. This helps so that you are able to feel confident and able to ask any questions without fear of being judged or being told ‘No! We’re going to do the photos this way’. This means that the person with the camera is not just there for their own objective to portray the image that they want but to give an image of the true person.

When I look at these pictures of me, what I see is somebody that’s happy and proud of themselves. I feel proud of these photos. But, the photos alone cannot explain everything about me, that’s why the words are just as important. I was asked to write a short text to go with my photos. I was also given ownership of what I wanted to say.

Patricia: After we finished The Roles We Play project, I joined the On Road Media “Talking about Poverty” project. With On Road Media, before even talking to a journalist, all of us people with lived experience of poverty have time to build our own peer support network. We understand more how the media works and we’ve gained confidence to speak to journalists.

We all have friends in the group now. I like seeing the group regularly to catch up on what’s going on for the others. We encourage one another. We can keep our spirits up together when things are hard.

In our peer group, we also help each other to say no when we’re not comfortable with the way a journalist pokes at us. We can think about what our own boundaries are.

And in the media training, we can practice saying no. If one of us doesn’t like the question a journalist asks, we can end an interview, or we can change the subject.

They do have a big job because it takes a lot of courage to ask certain questions. Once we’d met, all of us could relax more. It makes life a bit easier, knowing that you can have a relaxed conversation with a journalist.

There’s a journalist from the Daily Mirror who interviewed me a year ago. Then last month, the same journalist interviewed me again. The second time, Amanda was part of the same interview, which we did over the phone while Amanda and I were in Manchester. At the end of the interview, we asked the journalist to show us a draft of the interview before she published it. Her deadline was very short, but she did give us about an hour to check her draft. The article was an obituary for our dear friend Mo Roberts, and seeing the draft we were able to correct her place of birth and also her title because Mo was part of the National Coordination Team of ATD Fourth World.

Diana: Seeing Moraene Roberts’s memory honoured on a full page of a national newspaper was a watershed moment for us. Moraene died in early January, and in the six weeks following her death, the media ignored our letters. Some newspapers have a format to follow for obituaries that just don’t work for people in poverty. They want to know a person’s “career milestones”, their parents’ professions, the name of the university they attended—and even how their marriage ended. But we had another positive outcome with a Guardian journalist who happened to interview Moraene last year. The journalist kept an audio recording of the interview—and has now begun playing it at the events launching her new book (The Shame Game: Overturning the Toxic Poverty Narrative by Mary O’Hara).

I said before that assumptions can derail an interview. Those might be assumptions by a journalist—or they might be assumptions by people in poverty, like those made by the children who assumed that they had to disclose a lot of personal details to a journalist treating them to a meal. The way that ATD Fourth World tries to overcome those assumptions is with a methodology we developed called the Merging of Knowledge. One component of the methodology involves preparation work with groups of peers. As Patricia said in describing On Road Media, the peer group can be a place for people with similar lived experiences to think through together the possible risks of disclosing personal information publicly in order to make informed choices in advance.

The methodology also involves working with professionals like journalists to raise awareness about the ways that assumptions can obstruct communication. Sometimes these assumptions are built into the way we use language. Once a professional was talking about the need for low-income workers to be upskilled. But the man in poverty standing next to the professional didn’t even want to have a conversation about it. He told me later that actually the simple mention of the word “skill” triggers his feeling of failure at always being categorised as an “unskilled worker” because he does not have a formal qualification to recognise the skills that he does already have.

Poverty is emotionally wrenching. Amanda has said that poverty is so abnormal that it strips humanity away and that people can have their soul destroyed by poverty.

We need to create the conditions for people who feel crushed by poverty to feel free to speak their mind to a journalist. This means undoing assumptions. It means taking time, as Patricia pointed out, and making it possible for people with lived experience to go at their own pace without feeling rushed or poked at. And as Amanda told us at the beginning, treating people with dignity and respect must be part and parcel of every interview. 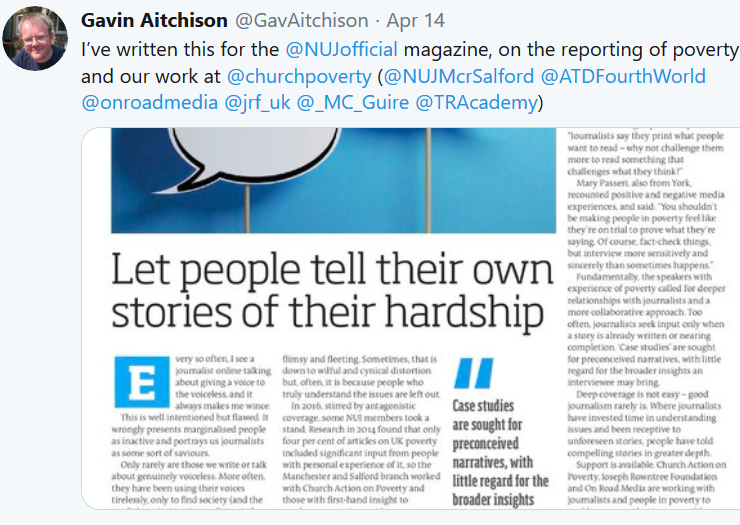 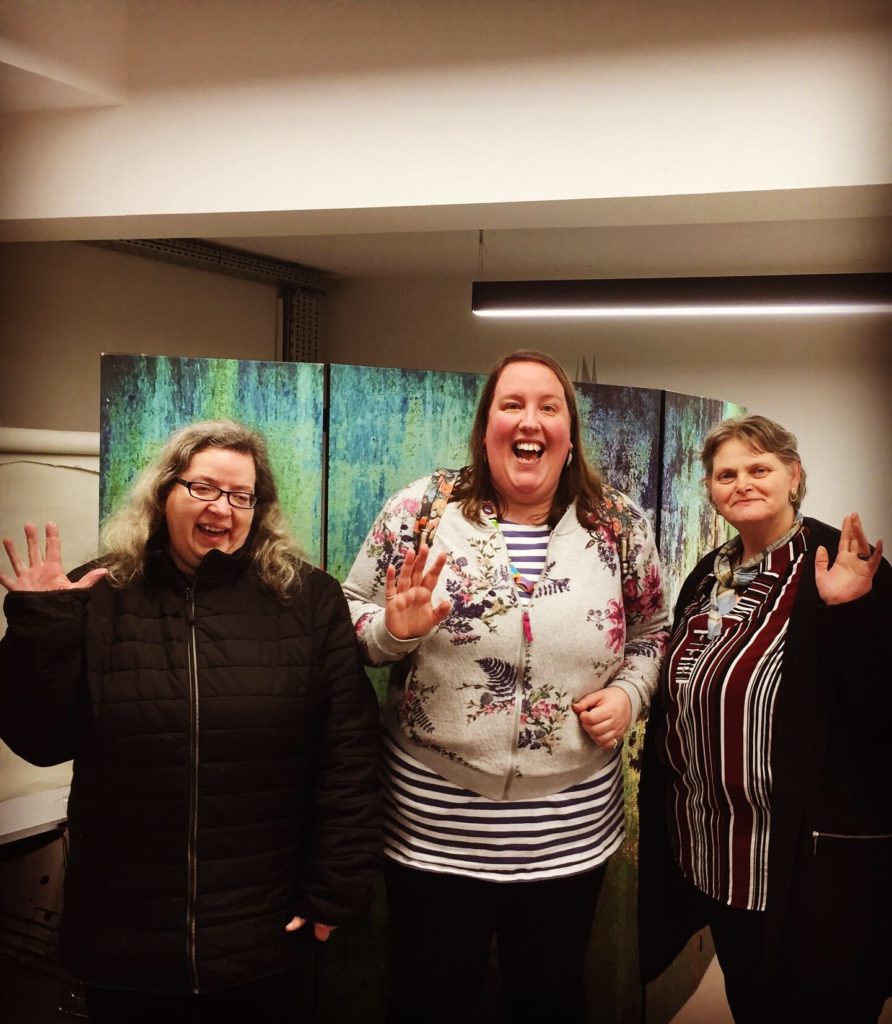 Above: Patricia, Harriet Anderson of the Joseph Rowntree Foundation, and Amanda.