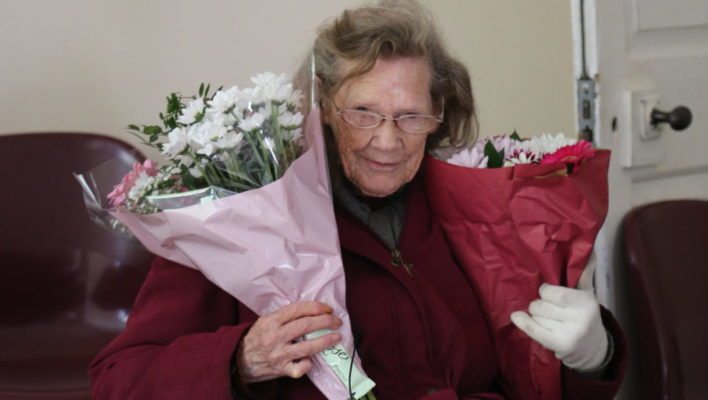 On 10 July 2020, fifty people gathered virtually and in person to celebrate the launch of The World Behind My Words, the first published book by Georgina Simmonds. In this video, Georgina reads one of her poems and speaks about why she has been writing for more than 35 years.

One of the speakers at the book launch was Andrew Hayes, a core team member of ATD Fourth World who helped Georgina compile her poetry for publication. He said:

“I can’t remember the first time I heard one of Georgina’s poems. They are such a fixture, such a part of the furniture, such a constant that not having a poem from Georgina at an event feels like a portent for the end of days, like a starting gun for the end of the world. […] But it is only in the last couple of years, talking to Georgina, that I have started to understand where these poems come from.

“Georgina started writing in 1984. She was encouraged to do so by a doctor while she was in hospital recovering after a road accident. She began by writing a book based on the story of her life and, over time, this evolved into the poems we all know today.

“These poems mix the autobiographical with the fantastical, dark truths with flights of fancy, images of the natural world with the hopes and fears inside all of our heads.

‘About me but not about me’

“When I asked Georgina about this yesterday, she said something to me that makes perfect sense: ‘The poems are about me but not about me’. […] There is a path to be plotted from the very first poem Georgina claims she ever wrote, ‘Behind My Smile’ to the poem last autumn that inspired the act of bringing this collection together, ‘The Black Hole of Poverty’. From a poem ‘about me’ to a poem ‘not about me’.

“When, last autumn, we began trying to bring Georgina’s poems together to select twenty or so to be printed, I had no idea what would come to the surface. At this point, it’s worth saying that one person who supported me in this was Georgina’s friend and champion, Moraene Roberts. Mo gently guided (or possibly shoved) me in the direction of a folder she had kept, a folder full of poetry with a whole section of Georgina’s poems. What I found in the folder astounded me and blew me away.

“There are poems in this book about Georgina’s childhood, about her hopes and dreams, but also about loneliness and the politics of the outside world. ‘The poems are about me but not about me.’

“When I asked Georgina yesterday why she writes her poems, she told me she writes for the joy of writing and to bring joy to other people. At the risk of inviting Georgina to bombard me with her poems for evermore, I want to say to Georgina that her poems bring me joy. And I hope that this event and the fact that you finally have your own book bring you joy.” 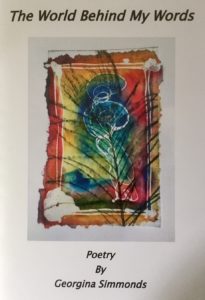 The lyrical quality of the Thames

The publishers of The World Behind My Words are Lynn and Dave Morris of the Journeymen Theatre. They first heard Georgina read one of her poems on 17 October 2019 at a commemoration of the United Nations International Day for the Eradication of Poverty.  Lynn recalls:

“Our first experience of Georgina was by the Thames as I was preparing to perform a little bit from ‘Red Flag over Bermondsey’ as Ada Salter, and Georgina read a particular poem about poverty. I thought it was actually stunning, Dave and I both did. We found it a deeply strange and moving poem. Then later, I found myself standing next to her, looking into the Thames, leaning on the wall together, and she just talked about the lyrical quality of the Thames, the noises it made and the impact this had on her.

“Her poem ‘The Black Hole of Poverty’ had an even deeper impact the second time we heard it. It is such a strange piece of work and it’s full of really interesting language play and imagery.

“It went deep with us that day. We couldn’t get her or her poetry out of our heads when we got home. 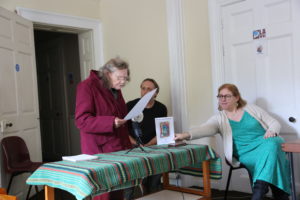 “It’s absolutely heartfelt stuff. It’s not necessarily polished poetry in a way that we might expect from more sophisticated poets, but I think therein lies the power of Georgina’s poetry, its appeal. She’s been there and she has lived it – as far as we can tell. Because part of Georgina is an enigma. Her poems make you want to know more about the person that she quite rightly is keeping to herself as she feels safe to do.”

“I became particularly aware of Georgina’s very deep, gravelly voice, and if I say so, she’s got a face that goes with the voice. It’s a strong face, strong eyes. I kept moving down closer so I could hear her speaking. It wasn’t so much that I wanted to eavesdrop on the conversation, but I wanted to hear her speaking. And that as much as her poem attracted me to her. She has led obviously a very difficult and a hard life, but something in this has triumphed. Something has come through, something has blossomed.”

Copies of the book are available for £5 each and can be ordered by emailing atd@atd-uk.org. All proceeds go towards ATD Fourth World’s anti-poverty work.