Skip to content
Home > Uncategorised > A conversation among birth parents

A conversation among birth parents 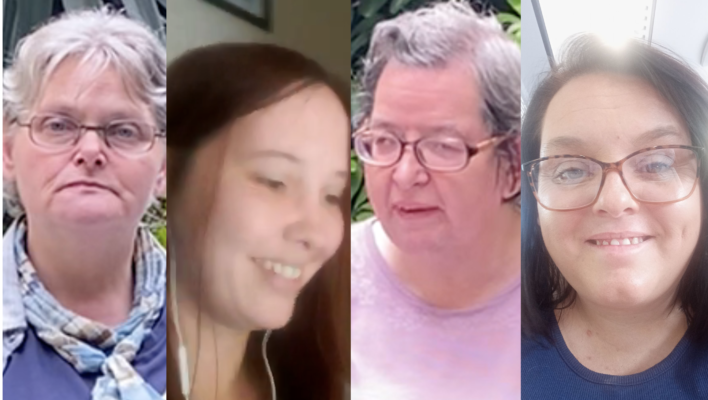 Communication between adopted children in England and their birth parents typically takes place through a system called ‘letterbox’ contact. During family court proceedings, a plan is made for the adoption agency to mediate an exchange of letters between the adoptive parents and the child’s birth family until the child turns 18. Most often either one or two letters per year are allowed.

The Nuffield Family Justice Observatory is currently examining how digitising letterbox contact might help birth parents keep positive, meaningful contact with their children post-adoption. Below, birth parents Karla, Amanda and Patricia reflect together on their experiences of traditional letterbox contact, and how they hope it might be improved through digital innovation.

Karla – ‘The social workers shredded the cards I sent. I was heartbroken. When I met the adopters, they said I can send cards for each occasion and even pictures. So I was sending love cards for the first year. But then later the social workers rung me and said, “We can’t pass these cards and pictures on, because the adopters have refused it. We’ve been in an emotional time of year with Christmas, so we’ll just put the cards through the shredder”. But they’d said I could send cards! They probably don’t even get my letters.’

Amanda – ‘Shredding it was bang out of order. They should have returned it to you.’

Patricia – ‘There’s not much support where people come out and help you write a letter.

Maybe the people that the letter goes through could actually support you. If you could ring them to talk through it, you’d tell them what you’d like to say and they’d help you write it down in a manner that can come across well.’

Amanda – ‘In some cases, at the end of the judgement, you get told what you can and can’t put in it. Like you can’t say Mummy or Daddy, you have to put your proper name.’

Karla – ‘When my mother used to write to her three granddaughters, the first day she wrote she was told, don’t put “Love from”. So I find other ways to tell them that I love them. I don’t say it in a way that directs it to them, like “I love you”, but I put little kisses. But even though they say not to put “Love, Mum”, I’m not gonna ever end the letter with my name, because I am the mum, so I just put “Lots of love, Me”.’

‘Somebody higher up decided “no”‘

Amanda – ‘Once you write the letter, it’ll stay on the pile for quite a while, or your kids’ll receive it years later. Or it just gets shredded because somebody else further up the chain has decided what can’t go in there. I know several people that have got reprimanded, because they put x y and zed in this letter, things they were told that they were allowed to put, but later somebody else higher up decided “no”, which I think is all wrong.’

Patricia – ‘It’s definitely wrong. I know several children that have come out of care and who never even got the letters. I hope that when they have this digital contact system, there’ll be more transparency, so that a parent is not going to be putting all this care and thought into a letter that doesn’t even get delivered because nothing was clear to begin with.’

Karla – ‘I wish the adopters would stick to the agreed dates. If ever I wasn’t being consistent about sending the letter on the agreed date, they’d stop all contact. But the adopters are always so late when I’m waiting and waiting to hear how my children are doing.

The digital contact system should have accountability, so that if the adoptive family doesn’t send their letter on the right date, it gets flagged up right away so that social services can look into it.’

What kind of communications do our children need?

Patricia – ‘With the digital contact system, could a child who’s eight or 10 maybe respond very quickly with an emoji? If they’re not ready to write a response yet they could still just let you know that they’ve read it with a little thumbs up or something like that.’

‘I’m thinking from a child’s point of view rather than my own, say if they woke up at one in the morning and thought, “I wonder what colour my mum’s eyes are, dark or light? How old are my parents now?”

‘It would be great if they can just hop onto this app, and put in the question they really want to know, and then you respond with an answer. I think it’d work really well that way.’

Karla – ‘They say that my younger daughter doesn’t even know that I exist. They’ve made that clear. The social worker says one child still remembers me and the other doesn’t. And they obviously don’t talk about me. That’s putting a burden on the girls. One of them has more memories, so is she going to become the one who’s sharing things with her sister some day? Or will she maybe regret if she doesn’t? If the digital contact system were more consistent, maybe it would also take that burden away because it shouldn’t have to be one sister who has that responsibility for the other one, just because she’s older and remembers more.’

Amanda – ‘Children are quite brainy. They’re more aware of what’s going on than we think, all while they may not be allowed to access their profile. I think they should be allowed to send a letter in their own right. If they need help, it should be somebody totally independent. Someone not connected to the adoptive parents because they  might go and tweak it or take out altogether what that child really wants to put in there. I’m very wary, so it needs to be somebody independent, not from the social services side or from the adopters’ side. It should be a child advocate who lets the child put whatever the child wants to put in there and doesn’t tell the adoptive parents so the child won’t get reprimanded.’

Patricia – ‘By the age of 14, that child is going to start wondering about their birth parents. I’ve known some of my friends, and friends of friends, who are starting to look for their family, but they are so closely watched. They were having to get their school friends to help them go to a library or somewhere to try and find out the name of their birth parents and try and track them down themself, just so they could have contact.

‘They want information about their own lives.’

Amanda – ‘I just hope the adoptive parents will agree to this digital contact system. It’s better than letters that just get lost in the system, and I’m not sure if it was lost by the postal system or the social workers. With this new system, you can know when it gets read. And hopefully the adoptive parents will open it up to the children so you know it’s been delivered, and you know it’s been read. So yeah, the idea is really good. I hope it works’.

To read another conversation on this topic, between Adele and Sammy, and also to hear audio excerpts from the above conversation among Karla, Amanda and Patricia, please click here.