‘The lens of human rights and poverty as a catalyst’ 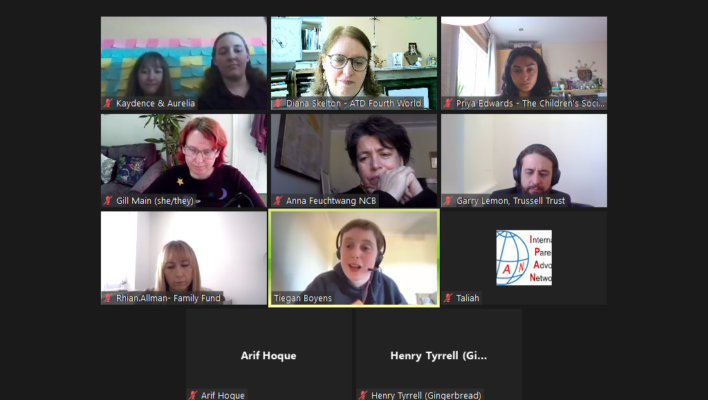 Above, Tiegan Boyens addresses a breakout room during the full meeting of the End Child Poverty Coalition on 25 February 2022. She, Kaydence and Aurelia Drayak, and Dr. Gill Main, all spoke about work they did with ATD Fourth World in 2021 to present to the United Nations views of children about being removed from their families into care or adoption.

In Tiegan’s view, “to actually view my life story as an adoptee through the lens of humans rights and poverty […] can be a catalyst for wider issues”. Aurelia said that “children who are shunted around don’t have a community. Trying to ‘protect’ children without listening to them is a recipe for disaster”.

Kaydence said: “We see extremes of poverty in Africa, but here people are ashamed to talk about poverty. We have food poverty. Lots of kids can’t afford the internet even though we need it for school.”

Gill said, “Poverty is done to people every time someone is judged for getting their child fashionable clothes without understanding that it’s so they won’t be bullied. What on earth gives adults the right to impose on children being put in care and ripped from everything they’ve ever known?”

Hello, I am Tiegan. I am currently twenty. I was adopted at the age of four after two years in foster care. The reasons I ended up there are very complex with no one answer; however one thing is clear:

Poverty was a reason.

This is why I found this opportunity so interesting to actually view my life story as an adoptee through the lens of humans rights and poverty as it can be preventable or manageable. Also it can be a catalyst for wider issues. To discuss a topic that never really gets discussed in relation to care, in my experience.

Anyone who wants to help has to start with listening and embracing the messy complications. If a child is removed, they need support to maintain family relationships and also their sense of identity.

It’s not enough to say there’s a few ‘success stories’. When a family is struggling with poverty and food, we’re just talking about bandages without looking for the reasons behind the problem. People shouldn’t be judged. Just because you got a memorial tattoo for your grandfather doesn’t mean you spent your money incorrectly. Even when ‘solutions’ make you lose your independence, you’re not allowed to be ungrateful.

Overall I found this [work with the UN] a very interesting and insightful experience. Despite attending the first session remotely where everyone else met face-to-face before meeting the UN ambassadors, I felt I could equally contribute and learn from others. It was such a good session of working, especially for me as this was the first time I had chance to discuss around poverty as one of the causes for me to end up in care and hear how I am not the only one by a long way.

I saw everyone being really open and honest which is very needed for discussions like this as it is the only way effective change will happen. I felt I could get across the points I wanted in relation to my own experiences.

For example, my dad was given very minimal benefits from the state despite being a single carer having to use his savings for us to get by, plus being placed in council housing at least 30 minutes by train from support networks, so this was an extra cost to see them regularly.

By the end [of our preparation meeting] we had come up with really key shared points, but also individual points as everyone has a different experience. It’s so important not to just look at shared ones to bring forward. It also feels we now have conenctions with others who have experienced similar issues to discuss and maybe work with later.

The time needed to explain our thinking

Then we had a discussion with Benoit Van Keirsbilck  from the United Nations Committee on the Rights of the Child. That was one of the best discussions I personally would say I have had in relation to sharing my experiences and advocating for future children to have better experiences. 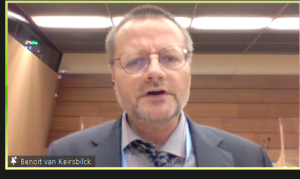 He was so supportive and understanding. He seemed to take on board everything we said and gave us action points of what he hopes to do. He gave us all the time we needed to share our points and to explain our thinking.

Overall from this work it really feels something may happen for the better and lived-experience points will carry on being a part of that. At every step of the way here, lived-experience was made to seem important to this matter.

I think the main changes I would like to see from this is the attuide change about poverty and then the prevention or working away from poverty by using money that is used when kids are in care to instead actually helping their parents, so no one is left stuck.

Hello I am Kaydence Drayak, I am a co-founder of Teen Advocacy.

Kaydence: Teen Advocacy got involved in the project when we were invited to join the regular meetings that were happening with stakeholders such as ATD 4th World and Article 39. We were having meetings weekly to try and plan how we were going to gather the views of young people for the report for the UN DGD.

Adapting to what children prefer

Teen Advocacy set off to meet with young people in Canada and Scotland, the original plan was to meet virtually online. We found it was difficult to get young people to engage, they often either didn’t want to speak virtually or could not speak virtually. So we had to adapt, and instead, we sent them the questions so they could take their time to send us a written response. Which we found was much more effective and we hoped, less stressful. We managed to get responses from seven young people in Canada and 15 young people in Scotland. Two of the children were between the ages of 9-12, and the rest of the young people were between the ages of 13-18. We compiled all the responses together and we sent them to ATD Fourth World who prepared the submission.

Aurelia: All the young people we spoke to have significant experience with the care system, they all have been in foster care and every single one of them have had multiple placements. The majority of the young people were removed permanently – no one was removed for less than 6 months, most were removed between the ages of 4-10, with four of them being removed from birth. Unfortunately their experiences have been terrible,  some of them have been placed in secure mental health units which were not intended for children, some of them have been homeless, some were put in youth correction facilities and some were put in children’s homes.

‘This is our lives’

The invaluable voices of all these young people make up a report four pages long we don’t have enough time to read it all out to you but we would love to share some quotes.

Kaydence: One of the young people said,

“Being placed in alternative care has torn our families apart and ruined our relationships.”

“For some of us, alternative care was where we were abused – not home with our families.”

Both these powerful quotes underline the fact that alternative care is harmful.

“Poverty should never be a reason children go into alternative care”

“If support was given to families, children might not need to be put in alternative care.”

Poverty does not mean that you are a bad parent or a bad person but for these young people it could mean they lose their families.

“This is important – it is our lives, and the lives of our families and communities.”

These young people don’t just lose their families but their friends, communities and lives.

Aurelia: One says, “This shapes who we are and who we will be – it takes away our trust and hope.”

Kaydence: And, “Even if things are tough at home, alternative care doesn’t mean our needs are met.”

The care system has done irreversible, serious, and widespread damage to children, their families, their communities, and even their culture. Taking children from their families should only be done when absolutely necessary and which leads us to policy change we believe the best policy change that could be made to truly empower children and young people would be to only be allowed to remove children from home with the consent of the child in question, if these young people had been given the choice none of them would have been wrongfully removed and had such a terrible breach of their rights, we need not just to listen to young people but empower them. We would like to reflect that this is not a call to simply improve the care system. This would be a mistake in how we redistribute resources. A gold plated tax-payer funded care system whereby ordinary families begin competing to have their children accepted into care for the perceived benefits would cause further disadvantage and inequality.

Aurelia: Another change in policy that would help children and young people would be to make being in poverty, being mentally or physically unwell, or being in any other way unable to provide for your child, no longer a reason to remove the child from home, a parent that cannot afford to buy their child new shoes is not a bad parent, a parent that is too sick to drop their child off at school is not a bad parent. These are good parents that need support. Instead when these situations occur they should be given help. And it is perhaps, most importantly this help must be co-produced with the family. When services try to help they often get it wrong because they don’t understand the problem. People who live their lives understand best what will help them overcome their challenges

Thank you for listening to us.

In this report, the United Nations summarises their findings from the event that Tiegan, Kaydence, Aurelia and Gill contributed to.