Facing the obstacles of an inhumane immigration system 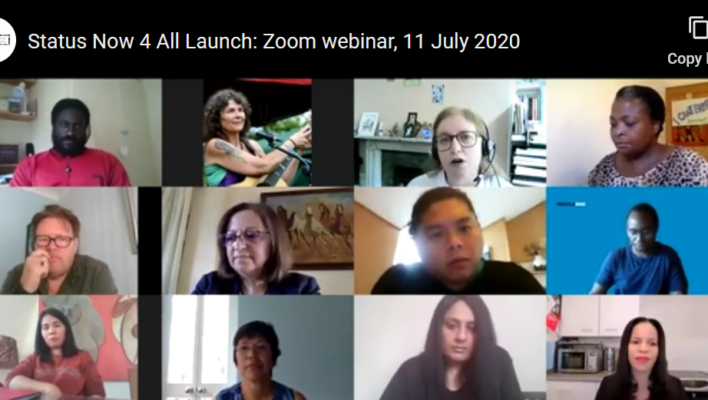 On 11 July 2020, the #StatusNow4All campaign was launched on behalf of all undocumented, destitute and migrant people in the UK and Ireland. A recording of the event is available here. Diana Skelton was asked to speak on behalf of ATD Fourth World. Her remarks are below.

ATD Fourth World is a human rights organisation working against poverty and led by the lived experience of people in poverty. We see the well-being of society as a whole, where the denial of the human rights of a single individual does harm to all. In our view, people who have experienced the denial of their dignity lead the way in helping society to understand better what kind of world we want to shape together.

One of these people was Moraene Roberts, who died in January. She struggled all her life with poverty and physical disability. She also played a leading role in ATD Fourth World and served as part of our National Coordination Team for the last six years of her life. Moraene was deeply concerned about the human rights of people facing the obstacles of an inhumane immigration system, and so I would like to read to you some of her words on this subject:

In 2002, giving a speech to the Fabian Society think tank, Moraene said:

“Certain actions taken by our government actually create poverty for some. I’m thinking of the plight of asylum-seekers who are expected to live on 70% of income support, are placed in accommodations no one else wants or in prisons, and forced to endure the indignity of presenting vouchers at specific shops.

“This is a source of shame to us all. If this is being done in my name, I say here and now: no more. I have a very low income but would gladly give up a little of it to end this right now.”

People are forced to compete for resources

Moraene was also deeply concerned about the ways that public discourse often pit people against one another sowing seeds of division and fomenting racism. In 2005, she spoke about this at a seminar organised by Oxfam and the Directory of Social Change:

“Poverty in the UK is not something that we should even be discussing in this day and age. It is shameful that it exists—but it does. […] No one deserves to be living in poverty; yet we see again the separation of people into deserving and undeserving, creating division of public opinion when deciding who whould be given support and who not. That division makes it easier to force groups of people experiencing poverty to compete for resources.

“Someone I know very well says, ‘The government should put money into kids above foreigners, drunks or druggies. […] I don’t want my taxes to go to people like them.’ This woman is well respected on our estate. […] Her views on the poor, as awful as they sound, are not untypical of comments I hear in many places. Mention asylum-seekers and the replies usually start, ‘I’m not a racist, but….’ Then the same people who usually speak negatively about people living in poverty are suddenly talking about ‘giving to our own poor first’. […]

The poor are blamed for their poverty and so it is their problem, not a social problem that is the responsibility of all of us. Stigmatising people living in poverty creates a divided society. […] We have to create a society that seeks solutions to poverty that are based on the knowledge and experience of people who live in poverty. […]

“We must work together to eradicate poverty, not for the sake of the poor but for all our sakes because the existence of poverty damages us all and lessens us as human beings.”

Remembering Moraene’s words, ATD Fourth World is proud to be part of the #StatusNow4All campaign.