All Party Parliamentary Group on Poverty – The digital divide 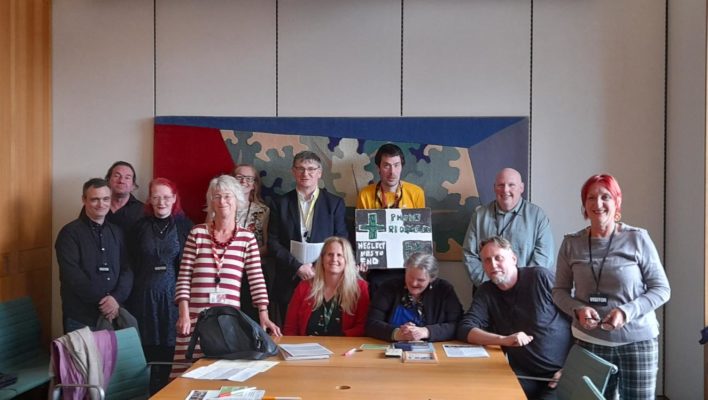 On the 19th of October 2022, over ten people from charities, lobby groups and MPs gathered in Portcullis House, Westminster, for an APPG on Poverty meeting, hosted by the APLE Collective.

All Party Parliamentary Groups (APPGs) are cross-party informal groups formed and run by members of the House of Commons and the House of Lords, who share interest in a particular policy area. On Wednesday the 19th of October, the APLE Collective was invited to attend and host the APPG on Poverty meeting, as a way to commemorate the International Day to End Poverty.

ATD Fourth World is a founding member of the APLE Collective. Its members are individuals and 10 non-profit organisations, all led by people with lived experience of poverty. A shared priority for the Collective has been its ongoing campaign around the digital divide, which was the focus of the APPG on Poverty meeting.

The digital divide, as explained by the APLE Collective is “a term used to describe the inequality of digital access experienced by people living in poverty, created through a complex and multi-faceted set of barriers.” As we move towards a technology-based society, the exclusion from internet access can lead to devastating effects, such as health problems (due to not being able to attend online GP appointments), interventions by children’s social services (due to not being able to attend online court dates or meetings) and many more. The APLE Collective strongly believes that money should not be a barrier in people trying to access internet. (To learn more about the digital divide, please click here.)

What happened on the day:

The meeting started with an introduction by David Linden MP, Chair of the APPG on Poverty. He was followed by Amanda Button, ATD Fourth World activist, who introduced the issue of the digital divide. (Click here to read her whole speech.) The meeting continued with different stories told by people with lived experience of poverty, discussing the impact of the digital divide on transport, refugee and asylum seekers, and children and education. This included Thomas Mayes, ATD Fourth World activist, talking about the importance of parent advocates when parents are in meetings with social services and the difficulties in conducting these meetings online. (Click here to read Thomas’ speech.)

To finalise the presentation, APLE gave a list of recommendations on how to solve some of the issues raised throughout the meeting. Some of these suggestions included:

The session reached an end with a Q&A that gave the opportunity for MPs and people with lived experience to engage in conversations about the issues raised throughout the meeting. The APLE Collective committed to produce a document for the APPG on Poverty which will detail their asks around the issue of the digital divide.

The impact it had:

Although it is impossible to quantify the impact this meeting had, after the event, the APLE members who had attended the APPG had a common sense of feeling heard, powerful and hopeful. Amanda Button said:

“During the meeting, I felt heard. The MPs present in the room where listening and looked genuinely interested to know more about what we had to say.”

“What we were saying there, they can bring it up to debate in the House of Commons. That gives me hope.”

The positive feelings APLE members felt after leaving the meeting will carry on with them.

We hope the government will debate and take into consideration the suggestions and concerns presented to the APPG. Despite hoping that political action follows up from this meeting, we are delighted to have amplified the voices of people with lived experience of poverty. We believe that giving people with lived experience a platform to share their thoughts and opinions in the political arena  is crucial. At the end of the day, they will be the ones more affected by the parliamentary decisions.